Bakery Sanneh, a laboratory scientist, has said The Gambia lacked the capacity to test Ebola, but all what the country could do was to collect sample, isolate and facilitate any Ebola suspect to Dakar for processing its result.

According to Mr Sanneh, to detect Ebola suspect is not easy and even where a sample is collected in The Gambia it has to go through many channels like WHO for advice and there are criteria to follow before sending any Ebola sample suspect to Dakar.

Mr Sanneh was speaking during the opening of a two-hour orientation of youth groups on Ebola prevention organised by Fong 4life, Lend Hand Society, and Change for a Change in collaboration with the directorate of health promotion and education unit under the Ministry of Health and Social Welfare.

He said the most important tool The Gambia relies on is the resources and the acquisition of knowledge to sensitize the masses on the prevention of Ebola.

He buttressed on the danger of Ebola and the importance attached to the orientation of youth groups on its prevention.

He stated that it is the knowledge that Gambians have to avert Ebola. He also expressed total appreciation to seeing young Gambians joining the crucial fight against Ebola, which is a clear demonstration of patriotism.

Modou Njie, Director of Health Promotion and Education Unit, thanked one Fatou Njie, the lady behind the forum, to become a reality.

He described as brilliant idea the lobbying of young people to train them on Ebola prevention, adding that the importance attached to the training could not be over-emphasised since education or knowledge is the only way and the best tool to fight this highly contagious disease, which is a major concern.

According to him, the youth groups are coming to the health directorate seeking some hours of orientation on Ebola so that at the end of the session they would be equipped with the basic knowledge to go out and sensitize others.

“It is something that every patriotic citizen should practise looking at the danger of Ebola,” he said.

He thanked the groups under the coordination of Fatou Njie for their concern, urging other sector players including the private sector to join the crucial fight against Ebola before any eventuality.

He encouraged them to continue with the spirit and together Ebola would be prevented from reaching the country, saying all what Gambians should practise ishand washing with soap after shaking hand with anybody,and institutions should provide tap for their staff.

Sanna Sambou, the man in charge of surveillance, explained that the ministry of health has many sectors but works hand in glove and put their heads together in the best interest of Gambians.

He said they were there to share information on prevention of Ebola, adding that before going out telling people about Ebola one should know it first to be able to detect it.

He said the orientation forum was key as it would showcase how the disease transfers from one place to another, which is very important because it is a disease acquired through contact. 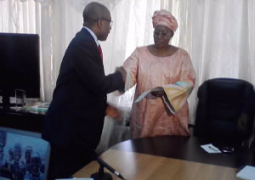