Tomorrow is the day set aside by the Sports Journalists Association of The Gambia (SJAG) for the 2nd edition of the eagerly anticipated Fatou Mbye Memorial Football Tournament sponsored by the Gambia Press Union (GPU).

The first game of the tournament will see West Coast Radio battling out with Paradise FM Radio at the Father Gough Sports Complex in Manjai on Saturday at 9.00am.

This is expected to be followed by another titanic encounter between Gambia Info/Daily Observer selection and Kids with Talents Radio Station at the Serrekunda West Mini-stadium at 9.00am.

Day two of the championship will also see the two giants rubbing shoulders when Amadou Wuyeh Manga’s Unique FM will face Teranga FM at the Serrekunda East Mini-stadium at 9.00am to be followed by Foroyaa versus a Media selection to be captained by The Point newspaper’s prolific centre forward Lamin Drammeh, at the Serrekunda West Mini-stadium at 9.00am.

Monday’s matches will feature the SJAG female team who are to meet Red Scorpions at 4.30pm at the Serekunda West Mini-stadium while Armed Forces will entertain Jamcity at the same time at the Serrekunda East Mini-stadium on Monday. 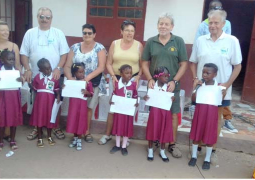