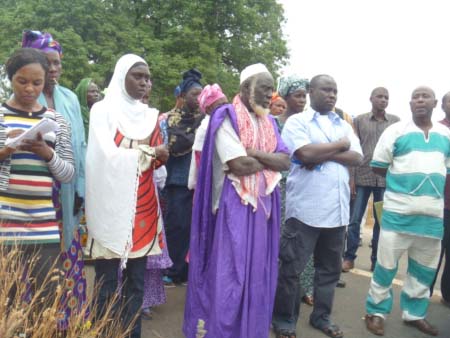 The project coordinator of Food and Agricultural Sector Development Project (FASDEP) has disclosed that the project targets about 240,000 beneficiaries.

He made the disclosure during a three-day sensitization tour on FASDEP intervention through its sites in fifteen communities within the West Coast Region.

The sensitization, coordinated by the Regional Agricultural Directorate in the West Coast Region and the office of the Governor, was supported by the FASDEP Project.

The tour was also meant to accord FASDEP officials and team and its collaborators such as the regional agricultural directorate, the opportunity for verification of the project intervention sites ahead of the commencement of the actual civil work.

The sensitization was conducted for the project team to have firsthand information about the beneficiaries on some of the challenges, constraints and other needs affecting them at their vegetable gardens and upland conservation, to find possible solutions to the problems.

He disclosed that the project will install boreholes, with solar panel, fence their horticultural gardens, provide them with initial production seeds, and ease their access to market and roads.

The purpose of the sensitization, he added, was to assess the intervention sites and meet with the beneficiaries, as well as village heads, VDC, alongside the regional governors for identification and confirmation of the allocated land for the women gardeners.

For his part, the director of the regional agricultural directorate of West Coast Region, Ousman Jammeh, said the initiative is a government project with one of its components gearing towards improving agriculture infrastructure development and management.

“This component will focus on land management, promotion of improved horticultural practices and expanding markets access through improved infrastructure,” he said.

He added that the tour aimed at sensitizing fifteen intervention sites of vegetables and two upland conservation sites.

Speaking earlier, the governor of West Coast Region, Lamin Sanneh, applauded the project team and the regional agricultural director for considering communities in his region for the new project.

He said the “importance attached to the project cannot be overemphasized” in that the project is out to suppress hunger and fight poverty in the country.