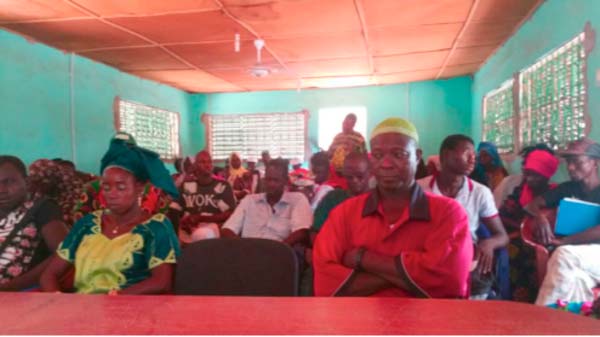 Thirty-five farmer-based organisations working with the FAO-EU MDG 1C project recently converged at the Regional Agricultural Directorate in Basse to select an executive committee of ten members to form and serve as apex body for commodity cooperatives.

The objectives of the committee include helping to strengthen the cooperatives, generate income, reduce poverty, provide social protection, create linkages between farmers and agribusiness enterprises, and give members a voice and representation to smallholder farmers in the Upper River Region.

In his welcome remarks, Sanna Jaina, a senior agricultural officer, thanked the farmers for their continued commitment to the principles and procedures of the project.

He also thanked the project organisers for the great initiative, adding that the MDC 1C had actually complemented the effort of the government, through the enormous support it had rendered to both farmers and extension workers across the region.

In his opening remarks, Dr Saikou E. Sanyang, agricultural field coordinator, acknowledged that the collaboration between the project and the agriculture sector had been cordial.

He commended the extension workers for “a job well done” and thanked the farmers for adhering to the strategies and procedures of the MDG 1C project.

Victor Baldeh, a representative from the governor’s office, thanked the project organisers on behalf of the governor, saying they had created an environment conducive for farmers to realise their potentials.

He cited many success stories registered by the project, and urged the participants to select responsible and committed farmers who could help them link with buyers and negotiate markets for them after harvest.

Alieu B. Sillah, FAO MDG 1C field officer for farmer groups, said the project had been supporting farmers to improve crop production and intensify the provision of inputs, training and technical assistance.

However, he said, they find it difficult to sell their produce at a favourable prices to enable them have real monetary value for the produce.

In order to support their post-harvest and commercialization activities, the project deemed it necessary to help smallholder farmers form commodity cooperatives.

The apex body of the cooperatives could collectively combine their resources, interests and initiatives to enable them spread fix costs over individual farmers, bargain collectively for better prices and enter into business agreement with traders, banks and local agribusiness enterprises, he said.

It was against this backdrop that these groups were formed into cooperatives, he added.

Chuga Joof, post-harvest/business officer, also stressed the importance of commodity cooperatives, saying “it is the only way farmers could be empowered and contribute immensely to socio-economic development of the respective communities”.

Sainey Touray, agribusiness officer, took the meeting through the rules, regulations and principles of commodity cooperatives.

He went further to buttress the roles and responsibilities of the executive committee of cooperative societies.

At the end of the deliberations, farmers were divided into districts to either select or elect their representatives to the apex body.

The process was “very smooth”, as they were left to decide on their own to make better choice of their representatives.

The seven representatives and additional three selected by the general assembly have formed the apex body of the commodity cooperatives.