Forty years ago, Sierra Leone held elections which pitched the then ruling SLPP under the lackluster Sir Albert

Margai, the younger brother to the honest founding father Sir Milton, and the opposition APC led by Siaka Stevens.

Also, forty years ago violence almost brought the election to a halt as the two parties, SLPP Mende and APC Temne, fought bloody turf battles in the urn up to the vote. Some of these themes have been reflected in recent years, and looking at his helps to understand current events.

The author is the daughter of Mohamed Forna, one of the young men who helped Siaka Stevens to win the 1967 vote, and when the soldiers stepped in to kill Africa's first opposition victory at the polls, Forna fought from exile in Guinea to have the APC and

Stevens restored back to power in April 1968.

For his troubles he was made Finance Minister by Stevens. But the young politician, married to a white woman, the author's mother, soon got fed up with the corruption and violence of Stevens' regime. Forna watched helplessly as Stevens sidelined men like him who were eager to restore sanity to the state, in favour of political thugs like S.I. Koroma and C.A. Kamara - Taylor, Scheming and ruthless ministers, who were to become Vice President and Prime Minister respectively under Stevens. Forna stood against bribery, and once reportedly walked out of a meeting called by Stevens to ask him to sign a contract with an Israeli company to supply the security forces with radios. The finance minister refused to sign the deal when he noticed that Stevens needed a kickback; the forces did not need the radio! He also stood against the violence brought into the body politic by his cabinet colleagues. When Stevens became obsessed with making Sierra Leone a Republic (just because tiny The Gambia bad become one), Forna in 1970, resigned, formed an opposition party and dared the incipient autocrat He was jailed until 1973. Upon release he was soon framed again in a so called coup, tried and hanged in July 1975, with seven others. After the hanging, Stevens still wanted to humiliate the dead men: their bodies were displayed by the prison wall. Still not sure if the men were really dead, Stevens asked the prison authorities to douse their bodies in acid (page 400).

The author was a young girl dining this sad period in Sierra Leone's history. In this book she uses the techniques of the journalist, historian, psychologist to unravel the path his father took from being a young medical doctor with a successful practice in Magburaka, in the North to an opposition politician, cabinet minister, dissident, treason suspect, condemned prisoner and his last steps to the gallows at the notorious Pademba Road prison in a rainy July night in 1975. The letter Forna wrote to his beautiful wife and young children minutes before he was hanged come to light in the book (page 399). The evil fate which befell those men who helped to have him banged by telling lies in court, their sponsors like the former CU) boss Bambay Kamara (hanged by the Strasser's regime in 1992, also for allegedly plotting a coup even while in prison) is also retold with sardonic relish by the author. She reveals also that all those who testified against her father in court, the rented witnesses, the hired judge who pronounce the death sentence, all died nastily years later, or are now selling peanuts along the slums of Freetown to eke out a living. That is how God works.

This book is a thorough study of a tyrant who used young and patriotic men to win power for him only to have them hanged and their broken bodies doused in acid, when they dared point a finger at his betrayal of the people. Reading the book one will see that the seeds of Sierra Leone's recent tragedy were sown by Stevens and his henchmen;

In pursuit of corrupt wealth and power they hanged, jailed, exiled opponents thereby raising a whole army of revenge seeking citizens, who in 1991 descended upon the country to wage the world's worst civil war.

This is a good book. It is part fiction, part historical, part memoir. If you want to understand about the nasty side of political power in Africa you must read it 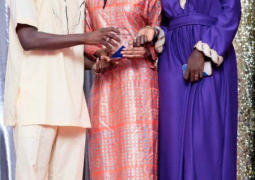