(Monday, 08th February 2010 issue)
Modou Lamin Jarju who was standing trial for procuring document by false pretence was recently convicted and sentenced by Magistrate Emmanuel Amadi of the Brikama Magistrates' Court to a fine of D5, 000, in default to serve three years imprisonment.

According to the police prosecutor, CPL Dawda Sanyang, it happened on 31st January 2010 when the accused went to the Banjul International Airport, Spanish Airlines and presented a Senegalese passport, bearing number 00217745 with a fake Greek Visa No GR 1091689 with intent to travel to Spain.

Consequent upon this, he said the accused was intercepted and taken to the Airport Police Station, where his voluntary statement was obtained.

The accused, in his plea of mitigation, begged the court to temper justice with mercy, as he put it, he never knew that the passport and visa were fake documents. He informed the court that he came to The Gambia for a treatment.

Isn't life a bowl of cherries? 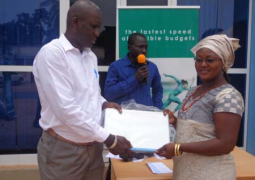 NYSS Ex-Corps Members Off to Mali