This week's tournament featured ten golfers, the highest number of golfers, since the beginning of the competition earlier this year.

Tiger Woods as he is called emerged the winner of the competition with a gross score of 51, one under par.

Alagie Drammeh, the captain of the Gambia Golf Association (GGA) and Dodou Kassama, who passed his test on Sunday to satisfy as a GGA professional golfer, were joined in second position with each a gross score of 53, one over par.

Alagie Drammeh came out in second position after he birdie the 17th hole and eagle the 18th hole for a tight second spot behind Fakebba Drammeh.

Yusupha Tamba and Tijan Kuyateh were also joined in third position each with a gross score of 54, two over par.

Mark Goddard came out first position in the amateurs category with a gross score of 54. 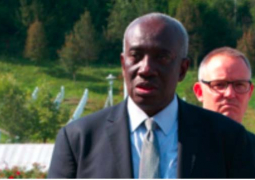