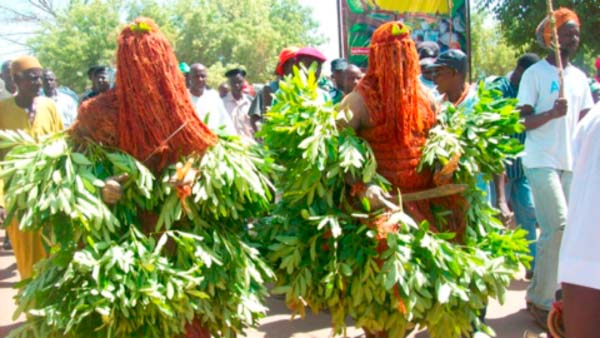 A new museum will soon be opened at Janjanbureh which will be dedicated to the Kankurang masquerade tradition, said Hassoum Ceesay, Director of Cultural Heritage.

According to him, in 2006 UNESCO declared the Kankurang as a type of cultural heritage which is of universal value and significance and The Gambia and Senegal have been taken as the two kankurang centres, which will be responsible for the preservation, conservation and interpretation of the Kankurang tradition.

“UNESCO gave us some funding to construct a centre called Kankurang Centre,” Mr Ceesay explained. “We will have the museum and education room and a conference hall also and all the facilities it needs. The construction house has been completed successfully, so now the NCAC [National Centre for Arts and Culture] is going to establish the museum.”

Mr Ceesay highlighted the three sectors that the new museum will be comprised of, saying the first part will be on the story of masquerades throughout the world especially in African countries, highlighting their significance and meaning.

“As regards the second part,” he said, “we are looking at the Kankurang itself; what is Kankurang and the different types, and its cultural, economic, and social significance using photographs and manikins and other things.

“The third part,” he went on, “we are looking at other ethnic groups and their masquerades like the zimba, kumpo and hunting; so work has started very well and it’s our belief that in this month or early December the exhibition will be mounted.”

He explained the significance of the exhibition stating that it is very important because it will be displayed in the centre of Janjanbureh, which is one of the historic and cultural centres in The Gambia.

“It is usually believed that George Town is like the origin of the Kankurang; that is why it is taken there, and it is going to add to the tourist attraction,” the cultural heritage director said. “The Island has lots of attractions including places like Armitage - the first high school outside Banjul - the Freedom Tree, the colonial graveyard and so on; these are places tourists visit.

“Our hope is that the arrival of the Kankurang museum will be another added value and to the experience of visitors who will be coming to the island to enjoy the culture and history of The Gambia., especially so that tourists have been asking for it after visiting the one in George Town.”

Ceesay said the museum will have an educational component where children will be taught about masquerades, the Kankurang and other traditional values.

He also narrated the challenges faced in the establishment of the museum, saying foremost among them is finance, as they had been short of funding over the challenge to get the museum up and running.

However they were able to overcome that hurdle with the full support of the community, who have been helping with cash as well as rendering services to keep the work in progress.

“I am encouraging the school children around that area - in Upper River and Central River – to be making use of the place when it is set up in the coming weeks,” Mr Ceesay said, adding that all are welcome to the museum as it is a learning centre for the Kankurang and other masquerades in The Gambia.