The criminal trial of the former Inspector General of Police, Ensa Badjie, alias Jesus, and two other military officers of the Gambia Armed Forces, was yesterday re-scheduled, after the trial judge, Justice Emmanuel Amadi (a Nigerian national), was reportedly given leave to observe national days of mourning following the death of the President of Nigeria.

In a similar development, the trial of Ibrahim Bun Sanneh, former Executive Director of National Drug Enforcement Agency, NDEA, and three others was also re-scheduled yesterday for the same reason.

When the court convened, after the last adjournment date, the Director of Public Prosecutions, Richard N. Chenge, informed the court of the prosecution's intention to amend and file fresh charges against the accused persons.

DPP Chenge also applied for the name of the 5th accused person, one Alieu Samba, to be struck out of the charge sheet, announcing that "the state wants to use him as a prosecution witness."

The DPP added that "the prosecution wants to amend certain portions of the previous charge sheet, and add additional charges."

He urged the court to grant him a short adjournment in order to file the amended charge sheet.

Meanwhile, both trials were re-scheduled to Monday 10th May 2010. 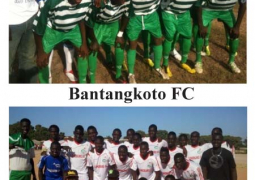