The European Union Commission in The Gambia last Friday, May 8th commemorated "Europe Day" at a cocktail reception held at the residence of the European Commission's Charge d'Affairs, .

The celebration, which brought together members of the diplomatic corps, ministers among others is seen as a day that celebrates the chain of historical events that culminated in the coalition of some of the world's greatest economies into one geographical and economic group known today as the European Union.

Speaking at the occasion, , European Commission Charge d'Affairs, highlighted some of the major achievements of the EC in The Gambia since last day.

According to her, EU is the biggest multilateral donor in The Gambia, adding that its contribution has increased over the years.

In the province of road infrastructure, said that last Thursday, the EU officially opened the Mandinaba-Seleti trunk road.

The road, she noted, plays a very important socio-economic role for The Gambia as well as and .

"I can also announce that within a month, the Barra-Amdallai trunk road will also be officially opened to traffic," she said.

"Without any doubt these two trunk roads will ease the traffic, the sub-regional corridor," she added.

In the sector of water resources, she announced that the Commission succeeded in signing all contracts for works, supplies and services, which she said was a miracle taking into account the delay taken at the commencement of the project.

In the domain of food security, she revealed that the EU have started to develop a 2.5 million Euro project to address the food security challenges and that the project will be implemented by the World Food Programme.

This project, she went on, will be complemented by another project of 5.5 million Euros fostering agricultural production and micro-finance which will be implemented by the World Bank.

"We have finished the preparatory work for a 2.5 million Euro project for strengthening the capacities of Non-state Actors, and very soon this project should be up and running," she said.

Also speaking on behalf of the government, Hon. Lamin Bojang, Minister for Works, Construction and Infrastructure, described Europe Day as quite important in various respects.

According to Minister Bojang, the day gives us as Gambians, the opportunity to rejoice with one of our most cherished development partners, the European Union, on the commemoration of the day that marks the birth of the EU.

"It is also a day that avails development partners of the EU, particularly the African Caribbean and Pacific () group of states, the chance to reaffirm our commitment to the principles and values that underpin our partnership," he said.

Hon. Bojang described the development co-operation between The Gambia and the European Community implemented over the past three decades as a mutually rewarding partnership.

This, he added, represents one of the building blocks towards the establishment and maintenance of global peace and prosperity.

"For The Gambia, a number of programmes and projects have been undertaken within the partnership arrangements that have significantly contributed to the improvement of the socio-economic development of the country," he said. 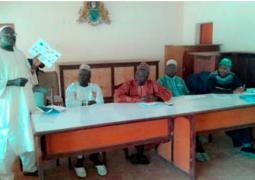