Following Senior Magistrate Kayode's order for the Director of Public Prosecution to appear in court last Friday to state his office's stance in the case of Musa Suso and the Inspector General of Police. The latter has given the police the go ahead to proceed with the matter.

In a letter tendered in court on Friday 8 May as an exhibit, the office has stated in the letter for the police to proceed with the case.

Meanwhile in continuing his cross-examination of Mr. David Colley, Director General of Prisons, Lawyer Jobarteh during the last sittings requested the death certificates, affidavits and post-mortem reports of inmates who died during detention. Consequently, Mr. Colley produced 52 death certificates and these were tendered as exhibits.

Lawyer Jobarteh put it to Director Colley that some of the deaths were due to acute shock, abdominal pain or food poisoning, but Mr. Colley however disagreed with these allegations.

Lawyer Jobarteh asserted that death certificates brought in evidence were not with any post-mortem reports except for the case of Manlafi Sanyang. He asked what had happened to the other reports.

In his response Mr. Colley said when a prisoner dies, it was up to relatives to request a post-mortem or not. He further explained that where a deceased's relatives could not be identified or located, the RVTH is usually requested to proceed with burial arrangements.

Asked whether requests for post-mortem, orders for burial were always put down in writing, Mr. Colley stated that some parents of dead prisoners were not interested in the post-mortem. However Lawyer Jobarteh further requested him on the authority of the writing, but he said they don't have it.

Counsel Jobarteh asked, "Do you know a prisoner by the Nickname Six Million dalasi?" Director Colley answered in the negative.

Lawyer Jobarteh at this point handed over two Foroyaa Newspaper editions to Mr. Colley dated 27-30 April 2006 and the other published 14 -, to read the captions. Superintendent Tijan Badjie objected to the witness reading the captions, noting that there was a procedure for the document to be tendered before the witness reads them. At this juncture Magistrate Kayode overruled and told the prosecutor not to choose for Mr. Colley adding that Foroyaa was a Newspaper in the and told the witness to proceed with the reading. The 27-30 April 2006 caption read '23 Inmates Alleged Dead at Mile 2 Prisons' and the second edition 14-15 March 2007 was captioned 'Prisoner Alleges 40 deaths at Mile 2'. Mr. Colley denied having any knowledge of the deaths noting that in 2001 only two deaths were reported in the prisons.

Lawyer Jobarteh asked Mr. Colley to give the court the correct records of the deaths at the prison because he has given the court 52 deaths but the prison official file that was tendered as exhibit put the number at 61 deaths. At this point Magistrate Kayode requested witness Colley not to be economical with the figures but to give an accurate record to the Court.

Mr. Colley in his response stated that 61 is the file Number and 52 is the official list.

Lawyer Jobarteh put it to the witness that the cause of death was chronic anemia. He stated that the cause of the death of the prisoners were acute shock, abdominal pains, or food poisoning, all of which statements Mr. Colley denied. 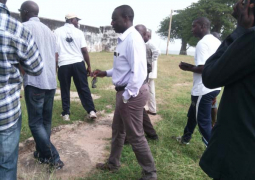