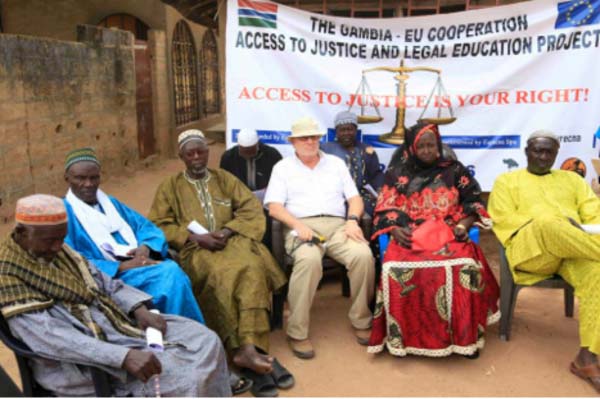 The European Union (EU) Access to Justice Project targeting people from the provinces and those in Brikama Monday held a face-to-face discussion about women and girls in Brikama, West Coast Region.

The activity was conducted by the NCCE as the primary implementer in partnership with the National Agency for Legal Aid, Female Lawyers Association-The Gambia and the Alternative Dispute Resolution Secretariat.

Speaking at the event, the representative of NCCE, Ansumana Yarboe, said it was their responsibility to protect every citizen in the country by organising training, workshops and seminars to sensitise the people about their civic rights.

The project is in partnership with different institutions to help the people know their rights, he said, adding that it is the responsibility of the government to protect its citizens.

He said laws are out to protect the people based on what is written in the constitution, especially the rights of children and women in society.

“Every right has a corresponding responsibility,” he added.

Mr Yarboe stressed that children should be treated well as it’s their right to go to school and be educated thus they should not be denied their rights.

He also said the mentally disabled should also be protected as they are also part of the people. “They have equal rights like that of the normal people and should not be sidelined,” he added.

For her part, Amie Jobe, FLAG coordinator, said that in 2005, the Government of The Gambia passed a law to protect women and children and called on the public to observe all the rights of children and their responsibilities.

She said the most important thing about the children’s right is that if a child happens to commit an offence the case is always taken to the juvenile court.

According to her, the women’s act aims at protecting every woman in the country without considering whether one is a citizen or not , as every woman should be protected.

Jobe added that FLAG is here to protect women even if the association could not help financially they would give free legal advice to anyone who calls on the association to defend them in court.

The face-to-face was followed by the unveiling of the mural painting in the governor’s office, and used to paint all the various regions to remind people about the project.