The Educational Research Network of West and Central Africa (ERNWCA) recently validated a study on the differences of World Food Programme (WFP) phasing-out on school enrolment, administrations and attendance of government conventional primary schools in the country. The validation exercise was held at their headquarters in Mile 7, Bakau.

The network consists of groups of volunteer educationists, teachers, researchers and educational professionals, who held the belief that educational research, should be introduced in schools.

In his opening remarks, the National Co-ordinator Mr. Makaireh Njie stated that ERNWACA network consists of Francophone and Anglophone countries in West and , constituting 16-member countries.

According to him, the members come from various national institutions, including universities, teachers' training institutes, research centres, governments and NGOs.

In presenting the study, the principal researcher for the Ministry of Basic and Secondary Education, Mr. Momodou Cham, said that WFP was introduced in The Gambia far back in 1970.

"From the regional perspective, Region One had the lowest average annual growth rate in enrolment and admission during phase-out periods even though they were excluded," he asserted.

He recommended that school-feeding programme is necessary in schools for the attainment of MDG goal by 2015. 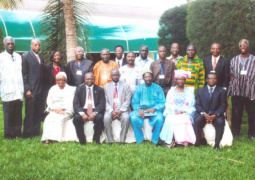