Mr Gaye, who made the revelation in an interview with The Point at his office in Jeswang recently, added that The Gambia is now classified as the second country in terms of progress on Renewable Energy under the GEF4 UNIDO project.

According to him, the overarching objective is to develop and promote a market environment that would stimulate investment in renewable energy based mini-grids for productive use in rural areas of The Gambia.

He pointed out that the energy sector in The Gambia is characterised by low levels of access to modern energy services, a high dependence on traditional biomass fuels and an unsustainable dependence on imported fossil fuels for electricity generation.

“Given the vast renewable energy resources that are available in The Gambia, there is no doubt that the development of these resources will significantly address some of the challenges being faced in the energy sector,” said Mr Gaye.

Mr Gaye added that using the integrated approach by combining demonstration renewable projects with capacity building and technical assistance at the institutional, policy, market and investment level, the project had significantly addressed some of the barriers to the deployment of renewable energy technologies in The Gambia.

Renewable energy is the energy for the future, even though most of the developing countries concentrate on conventional energy which consumes fossil fuels which are very expensive and hard to maintain.

He noted that fossil fuels could not take the developing countries to where they want to be in terms of sustainable energy systems; although in as much as renewable energy could not address the current energy needs, but at least it help to minimise the effects of climate change and promote environmental sustainability.

He said: “The GEF 4 UNIDO project officially started in 2012 with a total cost of US$5.79 million with co-financing of D3.976 million from the Gambia government, ministry of energy, national environment agency, EU delegation to The Gambia and project developers.”

According to him, the project had four major components namely, demonstrating the viability of energy projects, strategy for scaling up of renewable energy investment, strengthening legal and regulatory framework for the renewable energy sector and capacity building and training.

Highlighting some of the achievements realised by the project within the project lifespan, Mr Gaye said: “We are happy to report that the GEF4 UNIDO project has made tremendous achievements and the impacts are there for people to see for themselves.”

One of them was the Mbolo in Tujereng, which was installed at a training center where women are trained on various skills, he said.

He stated that the project was successful in that it had attracted the attention of some international bodies; as this year, UN Women for the first time visited The Gambia to particularly under-study what is happening at Mbolo regarding women and renewable energy.

“This project has not only helped to improve services delivery at the center in terms of expansion in its activities, but also inspired the neighbourhood to install renewable energy systems or solar systems in their homes, which is one of the GEF 4 UNIDO projects, to serve as a stimulant or trigger to get people interested in RE. It is not actually meant to provide full funding because of donor fatigue.”

He indicated that RE is a viable option to supplement, and generation from the national grids and the Mbolo project had been done.

It had influenced the installation of 60KW solar PV plant at Lemon Greek Hotel in Kerr Sering, which is now getting 80-85 per cent of energy supply from the plant, he said.

For the QCell project, he said, 10 solar wind hybrid systems were installed in 10 different communities located within the premises of health facilities, and the agreement was that the excess energy generated from the system is supplied to health facilities which do not have access to the national grid. As a result, they rely on power generators which, of course, use fossil fuels which are expensive and hard to maintain.

Mr Gaye further said for the Kaur NAWEC project which is also a 60kw project, it had come to replace the two generator sets of 60kw running on light fuel which burn faster than heavy fuel, which is very costly and the maintenance costs of these generators are also very expensive.

However, with this NAWEC project, the amount of fuel being used had drastically reduced by 400 liters a day and the maintenance cost for the solar plant was next to nothing - just to clean the solar panels.

Therefore, he added, the capital layout for that plant is US$ 480, 000 and the payback period is 7 years; the lifespan is 25 years and after 7 years it belongs to NAWEC.

He disclosed that this had now push NAWEC to further ask the project for another 600 kw windmill, possibly for the Greater Banjul Area and also asked GEF 5 UNIDO for additional 500 kw for either Farafenni or Barra, because they have now seen the benefits of renewable energy because fossil fuels are very expensive.

According to him, NAWEC is now creating an RE department at NAWEC, and eventually if NAWEC goes full force into RE the tendency of electricity bills will reduced drastically. 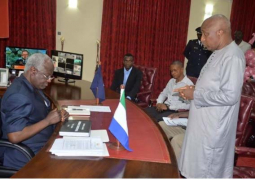