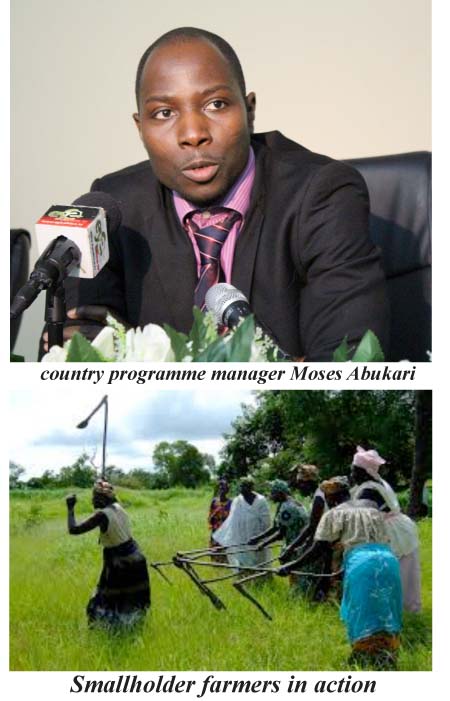 Moses Abukari, IFAD country programme manager, has said it was estimated that there are more than 500 million smallholder family farms in the world, but their livelihoods are daily threatened by the extreme impact of climate change.

Mr Abukari was speaking recently at the Kairaba Beach Hotel, during the launching of CHOSSO project.

He said the Sahel drought in 2011 had significantly affected The Gambia’s economy, and the delayed rains in 2014 had evidential impact on smallholders.

“It is in recognition of these climatic challenges that IFAD introduced and launched an innovative multi-donor initiative - the Adaptation for Smallholder Agriculture Programme (ASAP).”

Mr Abukari added that it has since become the largest global financing source dedicated to supporting adaptation of poor smallholder farmers to climate change.

ASAP’s objective is to improve the climate resilience of large-scale rural development programmes, and improve the capacity of at least 8 million smallholder farmers to expand their options in a rapidly changing environment.

Through ASAP, IFAD is driving a major scaling-up of successful ‘multiple-benefits’ and no regrets approaches to increase agricultural output, while simultaneously reducing vulnerability to climate-related risks and diversifying livelihoods.

Therefore, using the ASAP lens, The Gambia is classified as a highly vulnerable country and eligible for the ASAP grant.

He said in close consultation with the Gambia government, IFAD commissioned a scoping mission in September 2014, which identified and prioritised smallholder’s climate vulnerabilities through a systematic approach.

There was ample evidence based on deeper climatic analysis that the resilient capacity of smallholder farmers must be further strengthened.

IFAD management then approved the concept note on “strengthening climate resilience of the National Agricultural Land and Water Management project (Nema)” with an ASAP grant of US$5 million.

According to him, the objective is to optimise the Nema’s effectiveness in addressing climate-related threats to smallholder agriculture, and to ensure the systematic mainstreaming of climate risk management in decision-making and planning processes at all levels.

“ASAP added value, despite costing less than ten percent of Nema, is to provide strategic investments for the public good in natural resources restitution, and protection to counter negative climate change impacts and enhance the resilience of the rural economy.”

He said with the approval of this project (Chosso), IFAD’s total projects and programmes financing sum up to 10, resulting in total cumulative project cost of about US$207.8 million of which IFAD financing amounts to US$93.0 million.

This is directly benefiting almost 155,700 rural households across the country, he said, adding that IFAD has co-financed some of these projects with notably the Africa Development Bank, the World Bank and Islamic Development Bank.

Nine of the projects are closed, and the only ongoing project is Nema with total IFAD financing of US$34 million, he noted.

Alhagie Manjang, deputy permanent secretary at the Ministry of Environment, said The Gambia’s economy being dependent on rain-fed agriculture is highly climate-sensitive, with severe consequences on food security and livelihood if global temperatures continue to rise.

Losses and damages to livelihood systems are increasingly becoming more unpredictable, he stated.

“It is worth noting that The Gambia has tasked itself to reduce greenhouse gas emission from key sectors of the economy by 44.4 per cent by 2025 and by 2030 with domestic and international support.”

He said the recent validation of the National Climate Change Policy provides over-arching framework for managing climate risks, building institutions and capacities for climate-resilient sustainable development in The Gambia.

“In line with the above policy, the ministry is aware of consultations with government, farmers and other stakeholders during the design of this project, and its launching and subsequent start-up workshop are also indicative of the commitment of the ministry of Agriculture and its key partners, in ensuring that all relevant stakeholders are well informed and involved in the implementation of the project.”

He said agriculture is the primary source of livelihood for many Gambians, employing more than 68 per cent of the workforce and accounting for about 40 per cent of the country’s export earnings, and contributing about 26 per cent of the Gross Domestic Product (GDP).

He said agriculture is predominantly subsistence and rain-fed, with farmers relying on traditional shifting cultivation and livestock management practices.

“The Gambia’s climate is Sahelian characterized by high variability in the amount and distribution of annual precipitation, and analysis of long-term climate data shows that the past 50 years have seen how crop failure in 2011 and erratic and delayed rainfall in 2014 affected economic growth in The Gambia.”