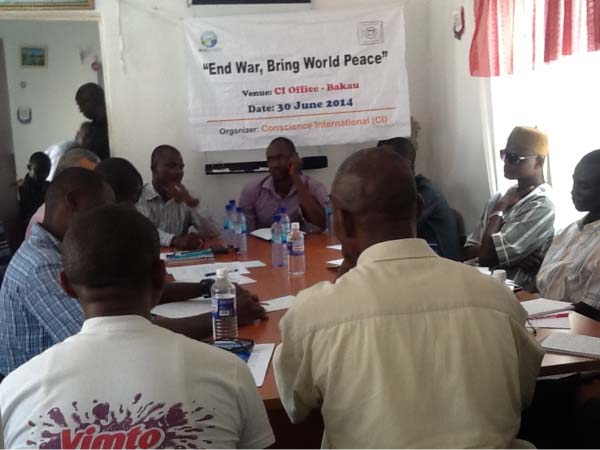 Shaka Ceesay, executive director, Conscience International has said the world should end war and bring peace for all.

He made this declaration at a one-day peace forum held at its head office in Bakau recently.

According to him, the heavens and earth formed by the hands of the creator have been given to humanity as an inheritance in the entire universe, life in its vast splendour exists only on our world.

“The life that grows on the earth is sustained from above by light, by the rain, and by the air they provide unconditionally to all living beings. We have received the precious gift of life from above, let us give glory to haven, and live in peace on earth. This is the truest teaching of heaven,” he said.

He asked that with this eternal gift, the grace and life we have received whether we are entitled to fight, kill and destroy one another.

“We cannot claim to desire peace and continue to provoke one another, causing conflict for the sake of valuing our own national interest above those of others,” he added.

To him, it takes lives of the youth, which is not a legacy one can leave for future generations.

He said of what use a young life born in our day and age, if it was thrown away in this manner without having had a chance to bloom.

“What price could compensate for the loss of life? Do these young souls have another chance at life?” he asked.

He added that as emissaries of world peace; as people who are working towards the restoration of humanity through a new heavenly culture, they decided to declare the following:

“We call on the heads of state of every country to sign an international agreement, a commitment to bringing all wars to an end.

“We ask them to do this from a spirit of deep-seated love for the people of their country.

“We call on all youth to unite in an effort to stop wars and pursue the restoration of peace by agreeing not to fight one another.”

For World Peace to become a reality this is the duty of all youths, everywhere and the only way to stop the fighting and pointless, tragic deaths, is to stop fighting, he said.

Nobody could ask for anything greater than this, and know that the efforts of young people of the world today in pursuit to pace would remain as a never fading light of life for all future generations.

“Furthermore,” he said, “we call on every person, every man, woman, and child in the world, to pick up the mantle of peace in whatever way you can, ask that you work to further the cause of world peace and restoration, making it a reality in your direct environments.”

Samuel Mendy of Conscience International gave a brief history of the existence of the NGO and said the forum was part of building the necessary capacity at national level to be able to replicate the knowledge gained when they get back to their various communities and workplaces in the country, so as to contribute to building peace not only in their workplaces but by extension in their communities.

He said the forum centred on ending wars, bringing world peace and the need to resolve inter-personal disputes, through techniques of mediation and negotiation.

“Peace we said must begin in the minds and hearts of children and the challenge is to ensure that children receive quality education that would build peace,” he concluded.