The lower court in Banjul yesterday acquitted and discharged Abdoulie Mbye alias Efry Mbye, a griot, and Momodou Lamin Jarju alias Rongo, an artist, of all charges preferred against them.

Principal Magistrate Alagbe, who delivered the judgment, told the court that the accused persons were properly arraigned before the court on a four-count charge.

He said the prosecution called eight witnesses, including the NDEA officers, Lamin Gassama and Musa Ndure, in support of their case.

According to the magistrate, PW5, Musa Ndure, a narcotics officer attached to the NDEA’s Holgam office, told the court that when the NDEA officers visited the village of Banjulinding they had a meeting with the accused persons, and later invited them to come to their office in Kanifing.

The magistrate added that PW3, Pa Malick Faye, also told the court that some time in 2011, the second accused person gave him letter for publication and that the same letter was email to his box by the first accused person.

Still delivering his judgment, the trial magistrate told the court that DW1, Momodou Lamin Jarju, also opened his defence and called several witnesses in support of his case.

Further reading the judgment, the trial magistrate added that the second accused person also opened his defence without calling any witness.

He added that the 2nd accused person told the court that he was given a letter to drop for Pa Malick Faye, the managing director of Observer Company for publication, and this was when he was about to go to Kanifing area and the first accused person asked him to drop it for him.

He said the second accused person further told the court that he is a griot and that he is illiterate, so he did not know the contents of the said letter and he, therefore, denied the charge against him.

The magistrate said at the closure of the case, both sides filed written briefs in support of their case.

He said counsel, therefore, urged the court to discharge the accused persons, as the prosecution woefully failed to prove their case beyond all reasonable doubt.

He said the prosecution on the other hand indicated in their briefs that the two accused persons conspired, and wrote a petition to the Secretary General, Office of the President.

The trial magistrate pointed out that the only issue that arose for determination was whether the said letter was a petition or not, because throughout the trial, only three major letters were admitted before the court.

He said one was addressed to the Permanent Secretary Local Government and Lands, Office of the President and the one sent to Pa Malick Faye for publication.

He noted that the court had agreed with the defense counsel that the prosecution had woefully failed to prove whether the said letter was a petition or not.

The magistrate said exhibit A-B and C could not be considered as a petition letter, and this was corroborated with the prosecution witness, Malang Badjie.

He added that Imam Bah was the third prosecution witness, who told the court that the moment the accused read the letter at the meeting he and Malang Badjie said that was not true, and it was just a mere speculation which happened to cause another confusion among themselves.

Magistrate Alagba added that the second accused person further told the court that he is illiterate, and he did not know the contents of the letter, so therefore no reasonable tribunal should convict any accused person.

He added that the evidence of the prosecution witnesses was weak.

He said the court believed that there were two factions at Banjulinding, the group of Eric Tunde and Malang Badjie.

The court would, therefore, recommend that the two group reconcile including the accused persons, so that the peace and tranquility could continue prevailing in the village of Banjulinding. 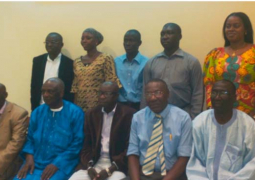