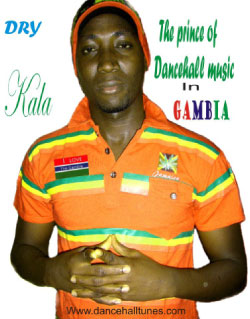 As part of efforts at taking The Gambian music to higher heights, Edward Mendy, alias Drykala, is also busy putting finishing touches at the studios to release his first album, which is expected to make a mark in the Gambian music industry.

The eight-track album entitled ‘Great Gambia’ is to be released in April this year.

In a chat with Entertainment on Wednesday with The Point Entertainment writer, Edward Mendy said he is calling on companies, individuals and other organizations to come to his aid so that he can release an album that will be highly remarkable in the history of Gambian music.

Drykala, who originated from Ma Kumbaya in the Western Region of The Gambia, started music since he was very young, as he inherited music from his grandparents. “I like music because I see music as a great motivation because it teaches people how to care and love.”

The Gambian upcoming musician also disclosed that his first performance was in 2004 in Senegal, adding that in 2009 he performed on different stages most of them held during the Tobaski celebrations.

“I have been working with different artistes,” Drykala told Entertainment, saying his future plan is to establish a musical school in the country “which is one thing that is lacking”.

“We need to expose our talents to the international world. I have been working on this album for nine years which I would like to use to hit the world now,” he added.

Edward Mendy released almost 21 singles some of which are on air. “My main challenge now is finance to be able to get my album released in Senegal,” he said.