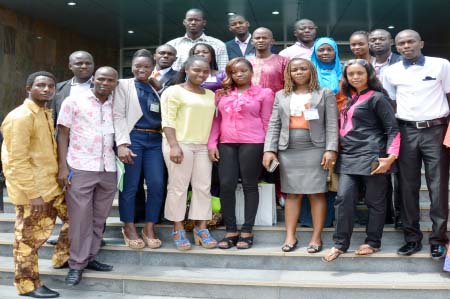 Young West African journalists on Friday concluded a weeklong training at the Ecowas Commission in Abuja, Nigeria, geared towards making them au fait with the protocols and other initiatives of the commission.

The training, dubbed ‘Get to Know Ecowas’, was attended by 15 journalists, one from each Ecowas member state, was held from 30 May to 3 June, 2016.  It was organised by the Communications Directorate of Ecowas Commission in collaboration with the Friedrich Ebert Stiftung (FES).

The idea was to create a pool of well-informed media practitioners who would act as catalysts to bridge the information and awareness gap between Ecowas and the citizens of West Africa.

Director of Ecowas Communications Directorate Sandra Oulate Fattoh Elleingand said the training was to provide full information to the participants on the achievements and other ongoing projects of the commission.

The capacity building forum was undertaken to equip the young journalists about the operations of Ecowas and its challenges so as to be able to trigger intensive discussions at their various countries.  Such discussions could lead to innovative suggestions for the achievement of ‘Ecowas of the People’ and addressing some of the challenges of the commission.

Madam Elleingand said the training was initiated knowing that it is imperative to have a crop of better informed journalists about Ecowas towards the envisaged greater integration of the sub-region.

Also speaking on the occasion, the resident representative of FES Nigeria, Madam Seija Sturies, said citizens of West Africa deserved to know the policies and programmes of Ecowas Commission and as well deserve to have a platform to contribute to the decisions of the commission that directly affect them.

Therefore, she said, the onus is on the media to bring information to citizens of West Africa because without information, the citizens cannot actively participate in the democratic processes of the commission.

She noted that making certain information such as the protocol on Free Movement of Goods, Persons and Services available to traders who operate across the border can help change some of the practices, and facilitate and accelerate regional integration and development.

Michael Zenner, German ambassador to Nigeria, said the commitment of Ecowas to integration, stability and collective security can help to foster public trust among member nations if known, i.e. when the media play its part well.

He said the expectation is that at the end of the weeklong training, the journalists will be in a better position to explain the Ecowas Commission’s programmes to the people: how the organisation works and who it works for.

The ambassador noted that the collaborative working of the media and the Ecowas Commission can build a West African bloc strong enough to withstand the storms of the future.

According to research, Ecowas is one of the socio-political regional success stories on the African continent and probably worldwide when compared to other initiatives such as the South Asian Community of States.

Some of the milestones accomplished by the Ecowas Commission include Common Ecowas passport for all member states, and free movement of goods, persons and services within the sub-region.

Dr. Isatou Touray is 'News and Report 'Gambian of the Year 2008'

Essa Sambou: We are going out for league title