A four-day joint session of the ECOWAS Parliament Committees on Agriculture, Water Resources and Rural Development and the Committee on Infrastructural and Industrial Development is under way at the Kairaba Beach Hotel.

Delivering his opening statement, Abdoulie Bojang, Speaker of the National Assembly, said the delocalized meeting of the ECOWAS Parliament Joint Committee on Agriculture, Environment, Water Resources and Rural Development, Infrastructure and Industrial Development has come at the right time.

Speaker Bojang further said The Gambia is synonymous with agriculture in many respects, such as its contribution to the country’s GDP and foreign exchange earnings, and its role as the major employer and contributor to poverty reduction and food and nutrition security.

He added that agriculture is the prime mover of Gambia’s economy on which key sectors are anchored for meeting short- and long-term sector goals and objectives.

He noted that the Gambia government, since the advent of the July 22nd Revolution in 1994, has steadily increased government allocation for agriculture from a meager 2.5 per cent to over 6 per cent amidst the global economic downturn, poor harvests due to erratic and inadequate rains mainly as a result of climate change and related shocks.

Over the period, Speaker Bojang continued, government formulated a series of policy documents to meet policy objectives, such as the Programme for Accelerated Growth and Employment (PAGE), Agriculture and Natural Resource Policy (ANR), Vision 2016, and Vision 2020.

“These policy documents are in synergy and mutually reinforcing and anchored on GNAIP pillars for the attainment of the Millennium Development Goals,” he added.

The GNAIP has six strategic programmes, he said, adding that these included improved Agricultural Land and Water Management, which aims to increase food security, income generating capacity and nutritional status of the farmer beneficiaries, especially women and youths through the use of sustainable land and water management practices for the cultivation of 25,000 hectares of land.

Hon. Suku Singhateh, chairman for the ECOWAS Parliament in The Gambia, said it was yet another special day in their collective effort to build a more integrated and prosperous West Africa, where “the benefits of togetherness are being felt by all, from the streets of our capital cities to our smallest villages”.

“As we endeavour to move from an ECOWAS of states to an ECOWAS of people, it is apparent that the ECOWAS Parliament will continue to be a central pillar in our match toward a more solidified integration of West Africa,” he said.

“A few months ago in the shining city of Abuja, the capital of the Federal Republic of Nigeria, the ECOWAS Parliament and the people of West Africa scored a major victory with the adoption of the enhancement of the powers of the ECOWAS Parliament by the Authority of ECOWAS Heads of State and Government.” 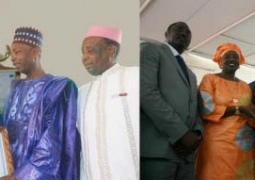