It is great and even timely that West African regional leaders have agreed to deploy 3,300 soldiers to Mali to retake the north from Islamist extremists.

No doubt, the appalling situation in the north of Mali, key among them the perennial instability, lack of security and the countless loss of valuable properties and even the loss of lives in the name of Sharia law, needs urgent action to save millions of lives.

At a summit of Ecowas, the group’s chairman said it was ready to use force to “dismantle terrorist and transnational criminal networks”.

As we always stated in these pages, Africans often tend to wait until the Eleventh Hour or even after an event before they started to respond.

While foreign powers and even Africans are divided on the best approach to the crisis in Mali, we believe that such a move by ECOWAS and its backers is a most welcomed development.

Since the military coup in April this year Mali, which has over the years enjoyed stability, has experienced severe instability, lack of security and countless troubles.

There is this fear that without any urgent action, the blood of many women, children and the most vulnerable of the society will continue be spilled in that country.

Many African countries are still suffering from conflicts, whether manifest or simmering. So, if the heads of state of ECOWAS countries have failed to pay more attention to the situation in some of these countries, it is only natural that things like this one would sooner or later lead to a catastrophe.

It is for these reasons, and a host of others, that our leaders should endorse the move by ECOWAS, and take the threat posed by the Islamist extremists in Mali as a serious one.

Our leaders should take urgent measures to save the lives of Malians, especially women and children. They must act now, by taking the lead to rescue the people in Mali, and other countries in the continent.

The current situation, therefore, offers heads of state of ECOWAS a unique opportunity to prove to the entire world that they have what it takes, to save not only Mali, but other countries in a similar situation from imminent danger.

Rather than waiting, the search for a solution to the current situation facing Malians must begin now in earnest. 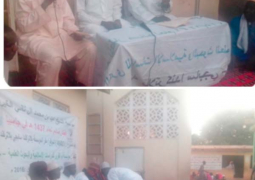