ECOWAS Ministers of Women's Affairs and Experts Confab in Banjul

As part of the activities marking the celebration of the Gambia's International Women's Day, the Dakar based ECOWAS Gender Development Centre, in collaboration with UNIFEM, organised a two-day meeting for ministers of women's affairs and experts from ECOWAS member countries on the strategic plan of ECOWAS Gender Centre at Jerma Hotel.

Delivering the keynote address on behalf of the president of the , Alh. Dr Yahya AJJ Jammeh, the Vice President Aja Isatou Njie Saidy described the event as historic as it is the first time The Gambia has hosted an ECOWAS meeting on women's affairs.

Their pride in hosting such an important meeting, VP Njie noted, is amply demonstrated by the Gambian government's unreserved invitation to all of them to the International Women's Day celebrations as well as their presence en-masse at the official opening and welcome ceremonies.

"In recognition of the important role played by women in our development efforts, my government has, since 1994, made the advancement of women and girls education a priority and has signed and ratified major International Women's Rights Instruments such as CEDAW and the protocol to the Charter on Human and peoples' Rights, on the Rights of women in Africa, and the government is also implementing the policy on the Advancement of Gambian Women 1999-2009.

VP Njie further noted that The Gambia's commitment to addressing gender issues and the uplifting of the status of women, is further exemplified by the increase in the enrolment and retention of the girl-child in school, increased access to credit and employment by women, the increased number of women in key decision-making positions and the formulation and implementation of poverty alleviation programmes.

Madam Njie Saidy finally commend the ECOWAS Commission in general and the ECOWAS Gender Development Centre in particular for the laudable initiatives aimed at mainstreaming gender into the integration process.

'There is global consensus that regionalisation is a powerful tool for economic development, therefore we should never relent in our efforts to push the regional integration process forward', said Secy for Justice Marie Saine Friduas on behalf of the Secy for Trade, Industry and Employment Secy Abdou Kolley.

Secy Friduas said that, the gender issue is central to their development agenda in the sub-region, therefore she added they should give gender the place it deserves in their national policies. "The principles and priorities of gender equity and equality should ensure the efficient allocation of resources to priority areas with concrete objectives and a corresponding monitoring and evaluation mechanism to reflect gender-specific goals and impacts," she said.

For her part, the acting director of the Ecowas Gender Development Centre Mrs. Aminata Dibba expressed her profound gratitude to H.E. president Jammeh for accepting to grace the important event. The president's attachment to this meeting she said is no surprise because of his well-known commitment to the advancement of women not only in The Gambia but also throughout the African Continent and the world at large.

The strategic plan is built around four priority areas of intervention, which have translated into twelve specific objectives and fifty priority action areas. She said that, if adopted, the plan will contribute towards the sustainable improvement of the wellbeing of women and men within the ECOWAS region by creating a socio cultural, legal, economic, institutional environment that will be conducive to gender equality and effective gender mainstreaming into national policies, development programmes and projects.

Mrs. Dibba finally thanked the UNIFEM and Economic Commission for - ECA for their support to them. 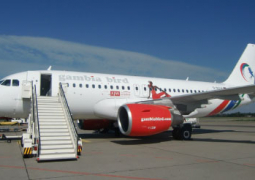