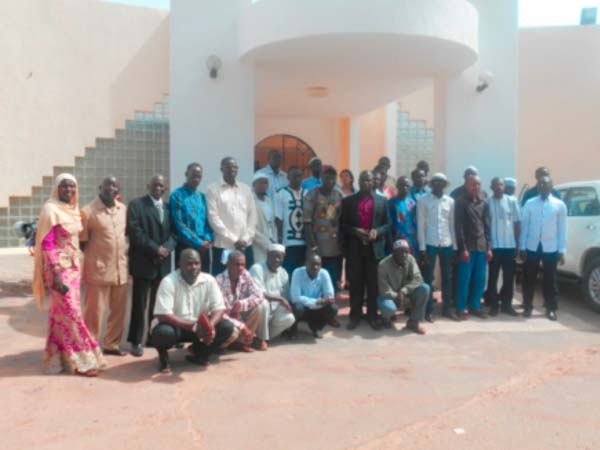 A three-day training course for adapting small-scale Irrigation to climate change in West and Central Africa, for stakeholders of GEF and IFAD projects, is currently under way at the Ocean Bay Hotel.

The forum was organized under the department of Forestry, funded by IFAD and implemented by FAO.

Speaking at the opening session, a representative from the FAO country office, Sira Njie, said the project on adapting small-scale irrigation to climate change in West and Central Africa, has a total budget of US$1.5 million.

The national phase is being implemented in four West African countries, and is expected to end by December 31st 2017.

In The Gambia, the project targets IFAD  intervention sites within the lowland  agro-ecology  in two regions, NBR and CRR-South, focusing on water retention and tidal  irrigation schemes, with a view to assess their vulnerability and resilience to climate change and determine adaptation needs.

According to Sira Njie, the expected outcomes of the project are availability of updated information on vulnerability of small-scale irrigation schemes to climate change for the main agro-ecology systems in the West and Central Africa region.

She said the projects are in alignment with the country development goals and strategic objectives, such as the National Agricultural Investment Plan (GNAIP)-2015 and the National Adaptation Programme for Action (NAPA) 2007.

She also stated that climate variability endangers livelihoods, well-being, and socio-economic factors needed for coping with threats to the environment and human systems that sustain situations, concerns and interest of farmers and pastoralists relating to climatic resilience in agriculture.

“It is in this regard that FAO in collaboration with its partners developed an assessment tool, SHARP, for measuring climate resilience to fill the void identified in farming systems resilience assessment, in an integrated, participatory and yet scientific manner tailored to the needs of smallholder farmers and pastoralists.”

She further stated that the outcome of the training forum shall benefit both the IFAD-funded project, and the two GEF-funded projects namely, adapting agriculture to climate change in The Gambia and community- based sustainable dryland forest management.

All these projects are in- line with the National Adaptation Programme for Action (NAPA) and aims to support immediate adaptation priorities in the agriculture and natural resources sector.

The FAO country representative thanked the Gambia government through the ministries of Agriculture, Forestry and Environment and Fisheries and Water Resources, for the fruitful relationship which FAO enjoys with its government partners.

“We take this opportunity to reaffirm our commitment to deepening our collaboration and cooperation with the government of The Gambia for the benefit of the people of The Gambia.”

Aji Oulaye Njie, climate change adaptation specialist, said the agriculture sector feeds the nation. However, over the past few years, they have seen the sector struggling to cope with the negative and drastic impacts of climate change.

The hydrologic cycle now includes more frequent and intense droughts and floods in many agriculture regions, she said.