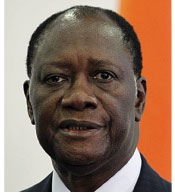 An extra-ordinary session of the ministers of the ECOWAS Mediation and Security Council (MSC) will take place on Saturday, 19th May, 2012 in Abidjan, Cote d’Ivoire to review the security situation in Guinea Bissau and Mali.

Coming after the just-ended regional Chiefs of Defence Staff (CCDS) meeting in Abuja on 14th May 2012, the meeting, which will be attended by Ministers of Foreign Affairs and Defence, will be updated on the political and security situation in Guinea Bissau and Mali by the President of the Commission, His Excellency Kadre Desire Ouedraogo.

The Chairman of the CCDS will present the report of the Committee’s meeting of 14th May 2012 held in Abuja, while Burkina Faso’s Minister of Foreign Affairs will brief the ministers on behalf of President Blaise Compaore on the mediation efforts in Mali.

The opening of the meeting will also be addressed by Cote d’Ivoire’s Minister of Foreign Affairs, Mr. Daniel Kablan Duncan, the current Chairman of the Council of Cote d’Ivoire. The Nigerian minister will also brief the meeting on the current status of discussions with the stakeholders in Guinea Bissau to resolve the political crisis in that country.

Nigeria was named to head a regional contact group to follow up on the region’s response to the crisis after the 26th extraordinary summit of ECOWAS leaders in Abidjan.

Regional leaders set up the Contact Group on Guinea Bissau to follow up and coordinate implementation of the region’s decisions on Mali, in the wake of the March 2012 military coup in the country and the separatist rebellion in the north.

Meanwhile, in a separate but related development, the ECOWAS Council of Ministers will meet in Abidjan from today 18th May 2012 on the allocation of nine statutory positions in the ECOWAS Commission and other Community institutions.

The two-day extraordinary session will consider proposals by the President of the ECOWAS Commission to fill the vacant positions, including those of the Institution’s Financial Controller as well as Director-General and Deputy Director-General of the West African Health Organization (WAHO) based in Bobo Dioulasso, Burkina Faso.

Also due for allocation is the position of the Commissioner for Human Development and Gender in the ECOWAS Commission which will become vacant by July 2012 as well as the Director-General and Deputy Director-General of the Inter-Governmental Group Action against Money Laundering and Terrorism financial in West Africa (GIABA), which fall vacant in April 2013 and January 2013, respectively.

Three other positions in the Community Court of Justice which will be vacant in February 2013 are also to be filled.

The Authority of Heads of State and Government, which approved the guidelines for the allocation of the positions in the Commission and the other Community institutions in February 2012, vests the President of the ECOWAS Commission with responsibility to make proposals based on agreed criteria for consideration by the Council of Ministers.

The criteria/guidelines seek to ensure an equitable, transparent and predictable system for the allocation of positions.

Countries in breach of the provisions of the regional Protocol on Democracy and Good Governance are, however, excluded from benefitting from the posts allocation.

The provisions relate to the occurrence of a coup d’état in a State, a breach of the convergence criteria on democracy and where the government has obtained power through unconstitutional means

In addition, countries that fail to apply the text governing regular payment of the Community Levy may also not benefit from such allocations. The levy, a 0.5 per cent tax on goods imported into Member States from outside the region, was introduced to fund the activities of the Commission and other Community Institutions.

The ministerial Council will submit its recommendations for approval by regional leaders during their mid-year ordinary summit at Yamoussoukro, Cote d’Ivoire.