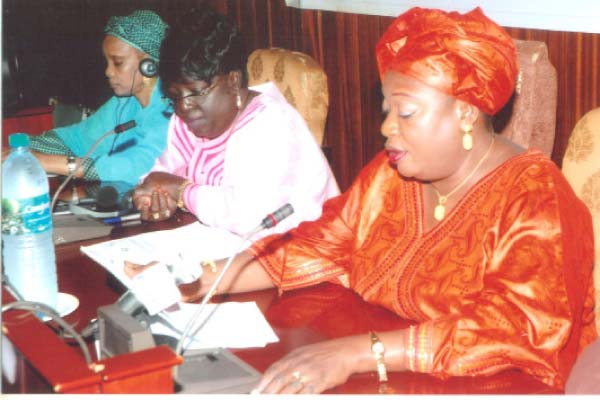 Experts of ECOWAS Gender Development Centre (EGDC) on 29 March 2011 ended a two-day forum of its 8th Consultative Committee Meeting in .

The meeting discussed the way forward for the Centre to help achieve its set goals.

Held at Paradise Suite Hotel, the programme was attended by gender experts from its member countries in the sub-region.

Speaking at the forum, Mrs Naffie Barry, Permanent Secretary Ministry of Trade, Regional Integration and Employment, which is also responsible for ECOWAS matters, stated that the promotion and protection of women in The Gambia is paramount to the development aspirations of the government.

This has resulted to an extended task for the government to embark on continuous programme development and consultations towards the empowerment of women and girls, she said.

"There is no doubt that the successful implementation of ECOWAS Gender Development Centre's activities will provide economic opportunities and assist women and girls to meet their developmental aspirations," she added.

According to her, the consultative committee is an advisory organ with the primary objective of assisting the centre in the execution of its mandate to contribute to the attainment of gender equity and equality in the ECOWAS region.

She added that the establishment of the committee is to assist the centre on its work to advocate and lobby on issues that affect women and children, peace and security in the sub-region to enable women to participate in development activities and meet their economic and social objectives.

PS Barry further informed experts to revisit the numerous declarations and pledges made for the welfare of women and children to protect them from economic exploitation and violence in particular.

"I believe that we can review the ECOWAS Gender and Development Centre's strategies on the implementation of the regional and other legal instruments for the promotion of the basic rights of women," she said.

She implored the committees to come up with well-defined and coherent resource mobilisation and advocacy strategies for the centre in critical issues of concern to the lives of women and children in the region, such as right to life, the right to health, the right to economic empowerment and the right to peace and security.

For her part, Madam Aminata Dibba, director of EGDC, said the meeting has come at the time when the Gender Centre is making significant progress in consolidating the gains that has been made over the years.

Madam Dibba noted that last year was both a difficult and fulfilling year for the EGDC. "It was a difficult year because the Gender Centre was still faced with the challenge of human resources constraints due to staffing," she added.

The gender centre has succeeded in strengthening the foundation for achieving gender equality and women’s empowerment in the ECOWAS region, she says.

She added that the centre was able to consolidate its scholarships of excellence for the girls programme in all but three member states as well as its programme of support to girls and women suffering from obstetrics fistula.