Ecobank Gambia Limited on Saturday 05th October 2013 celebrated Ecobank Day in The Gambia at a ceremony held at the St. John’s School for the Deaf in Kanifing.

The celebration, the first of its kind, was done in the form of painting a classroom at St. Johns School for the Deaf, and donation of learning materials to school children of Kabafita Lower Basic School in Brikama to support their education.

The celebration of Ecobank Day shows the cordial relationship between the bank and the communities in which the bank operates, Ms Marieme Ndiaye Mbaye, managing director of Ecobank Gambia, said.

She announced that henceforth, on October 5th of every year, Ecobank and its staff across the entire network will get together and devote a whole day to community-related activities.

According to her, the objective was to exchange, inspire, motivate and equip members of the communities and by so doing improve their life conditions in a modest way.

She told journalists that the theme for this year’s celebration is: “Education for young people in Africa”, and was based on the fact that youths represent more than 60% of Africa’s populace and they are the cream of any nation.

‘‘If we are able to provide them with the capacity of self-fulfillment through education, they are bound to become an asset for the African continent which happens to be our market,’’ she stated.

Alagie Bai Ceesay, Manager of Ecobank Westfield Branch, said the brand of Ecobank, which is the blue colour, is a sign of hope meaning Ecobank is groovy and is the new hope of life.

‘‘All the banks have tried and couldn’t achieve it because we are the only bank that is present in 34 African countries managed by true sons and daughters of the continent,’’ Bah stated.

Amadou Touray, Honourary Life President of St John School for the Deaf, described the day as a memorable day in the sense that no bank has ever gone to the school with such a large number to support the school.

“Yes, some banks have benefited us in the past, but in such a large number like this, that has never happened before,’’ he stated.

‘‘The name Eco is fitting; for instance, if a lion roars in the bush, it echoes and this is one of the examples that proof that you are really echoing because part of your corporate social responsibilities is by echoing in all circles by delivering to the people part of your profits,’’ Touray added.

According to him, the banking industry is very competitive, but Ecobank has taken the right direction and with this, more and more customers will be attracted.

Daniel Mendy, the principal of St John School for Deaf and Madam Serah Darboe, acting head mistress of Kabafita Lower Basic School in Brikama, commended Ecobank for what they described as a timely intervention, and assured the bank officials of their support.

Modou Gomez, a student of St. John School for the Deaf, on behalf of the school and the general student body commended Ecobank for the gesture, and urged others to emulate them. 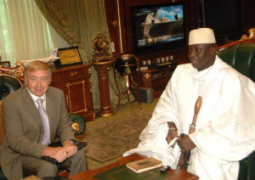