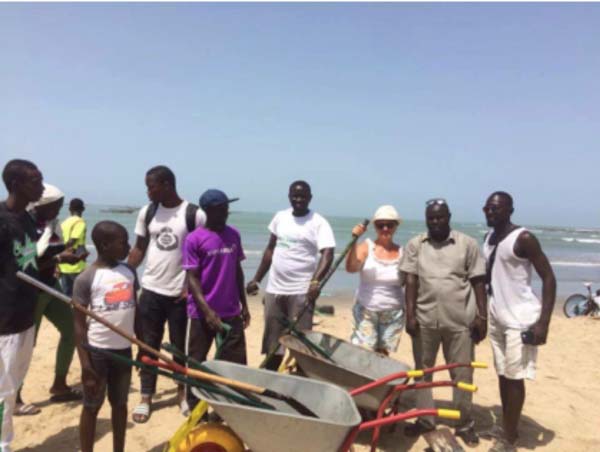 Eco Travel Gambia and partners Saturday commemorated Earth Day 2017, at a ceremony held at the Gunjur Fisheries Centre in Gunjur on the theme “Environmental & Climate Literacy”.

Earth Day is an annual celebration geared towards reminding the world about the importance of sustainable lifestyle and protection of the earth’s ecosystem.

Speaking on the occasion, Omar A.J. Saho, founder of Eco Travel Gambia (ETG), said it was a day on which they further strengthen their efforts as environmental activists and development agents, in raising public awareness and engaging stakeholders on environmental protection and preservation of the ecosystem.

He said Eco Travel Gambia and its partners organised a beach cleanup in commemorating Earth Day.

He said the event was timely in dealing with the tragedy of unregulated fishing and poor management solid waste along the Gunjur-Kartong coastline.

He said further that fish are caught beyond the capacity of local cold stores and processing enterprises, resulting in the discarding of fish back into the Atlantic Ocean, coupled with higher presence of solid waste along the coastline.

He further stated that overfishing and pollution of the coastal stretch between Gunjur to Kartong villages has become a major problem, disturbing both the coastal and marine ecosystem of the area.

Mr Saho also said that despite The Gambia’s Fisheries Act 2007, Fisheries Regulation 2008, and National Environment Management Act (NEMA) 1994 - all of which protects the marine resources and the coastal environment - coastal pollution and discarding of solid waste along the southern coastline has been a major concern to their organization and partners in Gunjur village.

He said they used this day to clean the beach so as to make the place conducive for locals as well as minimise the risks of ecological pressures to marine species.

“Since we are involved in tourism and conservation, ensuring the sustainability of coastline is part of our activities,” he said. “We believe that effectively managing the Gambian coastline will supplement or help support the livelihood sources of local communities through establishment of eco-camps, providing safari tours, and as well help raise public awareness about green living through eco-friendly lifestyles,” he said.

“In realising such eco-thinking concept of environmentalism and economic diversification, protecting the coastline of the country is the duty of the entire citizenry.”

“We therefore call on citizens to back The Gambia’s efforts towards sustainably conserving the marine and terrestrial resource of the country against all forms of anthropogenic ecological disturbance.”

Policymakers, environment activists, local communities and development agencies could not do it all alone, he said, adding that it was with “motivation that ETG and its partner organizations are participating periodically” in maintaining the southern coastline.