Skipper Ousman Jallow and Alagie Fofana each missed a penalty for Stockholm FC on Wednesday in their goalless draw game against Eden Border FC in the ongoing Serrekunda East Sports Development Organisation (SESDO) Nawetaan being played at the Serrekunda East Mini-stadium.

Stockholm FC benefited from a penalty as early as the first minute of the game, but skipper Ousman Jallow wasted the opportunity of giving his side the lead by blasting his sport kick over the cross bar.

Both teams have now collected each a single point in one encounter.

Meanwhile, Ball Conge FC will take on United Stars FC today, Friday, in the 3pm encounter, while Rangers FC will lock horns with Nguma FC in the 5pm kickoff of the same day at the Serrekunda East Mini-stadium.

Speaking to reporters shortly after the game, Abdou Gibba, assistant coach of Stockholm FC, said the game was well contested but that bad finishing resulted in their draw.

“We told our players to pin the middle of the field because Eden Border FC is a big team,” he said, adding that after they had worked for them, that was the time they started playing their style of football.

“I thank the players for putting up a very good fight during the game despite not winning today,” he said.

Edrissa Gassama, assistant coach of Eden Border FC, said they could not blame the players neither the technical staff for the game, noting: “This is football.”

He said they are one of the most successful and consistent teams in the Serrekunda East Zone because they have been participating in the nawetaan for ten years now and have never suffered from relegation.

“We are here to win the trophy this year,” he said, adding that they must qualify for the second round of the competition because they are coming all out for the maximum three points in their next game.

“Our midfield did not work well today,” he added, noting that his team comprises youngsters who could perform wonderfully in their next encounter. 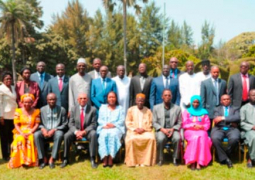