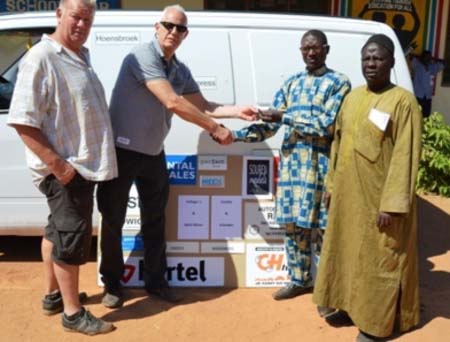 Two Dutch nationals, Hans Van Den Brink and Frank Houestadt, on Wednesday donated a Mercedes Mini Van Benz they drove from Holland to The Gambia in ten days to St. John’s School for the Deaf in Kanifing.

Hands Van Den Brink and Frank Houestadt, who drove the car from Holland through Belgium, France, Spain, Morocco, Mauritania, Senegal and then to The Gambia, also donated sportswear to the school.

Speaking shortly after the presentation, Mr Houestadt said the 10-day adventure took them through some good European roads but they had to also come across bumpy and sandy ways, hills and also animals along the way.

He added that they had 8 good days but also encountered 2 very bad days between the borders of Morocco and Mauritania, but stated that it was good the mission had been accomplished.

Mr Houestadt said the first contact with the school came through their neighbour Mr Clemens, who told him more about the sponsorship of the school.

It was then that he and Mr Brink decided to take a holiday and buy the Mercedes Mini Van for the school.

He said it was an adventure for them to drive from Holland to The Gambia and also a charity for the school.

He noted that they were impressed that they had seen the school, saying Mr Mendy and Ms Allen are really hardworking.

This was the first time for them to donate to the school and The Gambia, he said, adding that he hoped the school would enjoy the car.

He also expressed hope that the car would be useful to the school, noting that he was really impressed with the school in the two days they spent with them.

In their free time back home they volunteer to work with a football club called Menor Football Club.

They have a lot of work to do in looking for more sponsors for the school when they return home, he said.

Daniel Mendy, headmaster of St. John’s School for the Deaf, said he must commend Frank and Hans because hearing the story of their adventure showed that it was a real sacrifice they made.

They did it on humanitarian grounds, he said, adding that only God can pay them.

Mr Mendy added that they depend solely on Government assistance and philanthropists in running the school, noting that times are really hard and the funds from the school is not making ends meet.

The gift is placed high as they would now be able to use the vehicle to run the administrative errands of the school and also use it to take students who do fall ill to hospital.

“This is a precious gift to us and it will go a long way in meeting the needs of the students falling ill,” he pointed out, adding that the car will serve its purpose.

He said they run 3 buses for the transportation of their students, adding that the beginning of the year was hard for them due to the increase in fuel cost as they have got to be spending D13,150 on fuel weekly compared to the past when they used to spend D10,000 on fuel weekly.

They can no longer afford it, he said, adding that they are just making things work.

He noted further: “Amadou Touray [Honorary Life Chairman, Parents Teachers Association of the school] has been helpful in helping them knock at doors for financial support. The teachers have also been coordinating. We have a headache we are treating.”

Marian Allen, deputy headmistress, St. John’s School for the Deaf, explained how the relationship with Mr Clemens and the school came about, describing him as a good person who has worked well with them.

“When you get back home extend our gratitude and thanks to Clemens and wife,” she told Hans and Frank.

Amadou Touray, Honorary Life Chairman Parents Teachers Association of the school, who has been with the school for over 30 years, thanked the donors and prayed for God to reward them abundantly and to also give them good health, long life and more prosperity.

Mr Touray also called on others to emulate the duo for the kind gesture. 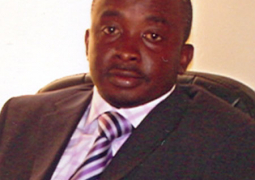