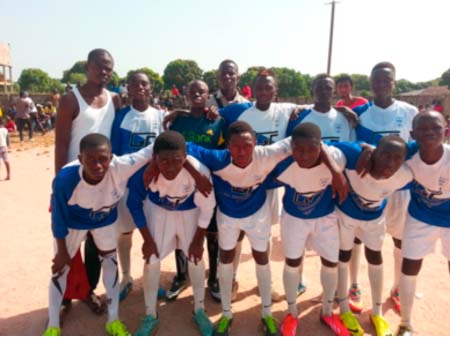 The Gambia Sports Foundation (GSF), in collaboration with Gambia For You (GFY), on Sunday commenced a five-team tournament for U-16 at the Busumbala Football Field.

The two are Netherlands aid organizations working for the promotion of young Gambian football talents, as well as health and education.

“GSF is set up to provide sportswear for the Gambian young talents as well as to support them as aspiring players,” he said.

Commenting on the tournament, the GSF administrator said the aim of the competition is to promote peace, unity, oneness, and understanding among the participating teams as well as the community,

He said football is a game that brings people from different backgrounds, race and religion and organizing such a tournament at free cost, is indeed vital.

He urged the participating teams to always adhere to the rules and regulations of the tournament, which is the promotion of peace, unity, tolerance and understanding during the entire period of the tournament.

Marcoen Oomen, manager, Gambia For You (GFY), in a brief remark, lauded the community of Busumbala for giving them the opportunity to organize the competition.

“We are indeed grateful to the community and the participating teams as well,” he said.

The competition is out to promote talents as well as vibrant and conducive environment for young talents at the grassroots level, Mr Oomen said.

Lamin Jatta, alias Jatta, the brain behind organizing the tournament, said the people of Busumbala are very grateful to the philanthropists for such a wonderful initiative aimed at promoting grassroots talents.

‘’Today is yet another historic event in the history of the village because at the end of the tournament, by next Sunday, the winners would go home with a trophy and a set of jersey, while the 2nd and 3rd prize-holders would also go home with good prizes. Handsome prizes will also be given to the best goalie of the competition and the best player, which will all boost the ability of the young players,’’ he noted.

Meanwhile, in the opening games, Black Lions FC trashed visitors Cape Point 1-0 courtesy of Momodou Touray, who converted a spot-kick after the defender of Cape Point wrestled down Sulayman Konateh in the 30th minute of the second half as Galaxy FC (Tin-Tin-Too) also beat Football For Pleasure courtesy of Batch Camara from a spot-kick in the 35th minute of the encounter.

In the last game of the day, Cape Point FC, who played against Pipeline FC, won by 3-0 on post-match penalty shootout, setting the stage for the semi-final encounters between Black Lions FC and Football For Pleasure, and Cape Point against Galaxy, to take place on 21 November 2015 from 9am - 11am and the final at 5pm.

Previous:
PERSONALITY OF THE WEEK: My objective is to strengthen Cuba-Gambia relations - Cuban Ambassador
Next:
Teachers train to discipline students without physical violence