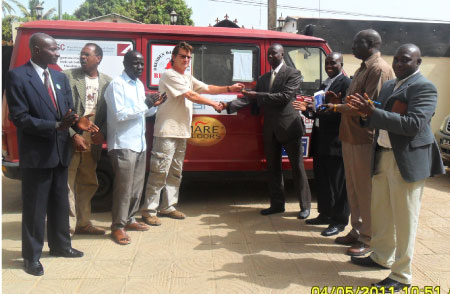 Dressden Banjul Organisation (DBO) on Tuesday donated a vehicle to the National Drug Enforcement Agency (NDEA) at the NDEA main campus behind Pipeline mosque along Kairaba Avenue.
Speaking at the handing-over ceremony, the Deputy Director of NDEA, Mr Kalilu Njie, thanked DBO for the donation. He said the vehicle donated would go a long way in assisting NDEA in fulfilling their mission.

Mr Njie promised that the vehicle donated to the agency “will be properly managed”, while calling on the general public to help NDEA in its crusade against drugs.

Dr Sulayman Sambou, a member of Dressden Banjul Organization, said they had been supporting different institutions in the country over the years and were happy to extend a helping hand to NDEA.

He said the organization, which was registered in the country as an NGO, has been existing for many years now. The aim of the NGO, officials say, is to complement government’s efforts in developing the country.

“We are more focused on health issues as well as on the operation-feed-the-people initiative through which we visit hospitals on Wednesdays, Thursdays and Fridays to supply patients with food items,” he said.

Dr Sambou highlighted some of the programmes they have carried out so far, which includes sensitization programmes on the dangers of drugs at the Janneh Koto Radio FM station in Gunjur and training of young people on drugs-related problems.

“We are not concentrating on one area; we want many people to benefit from us,” he added.

Other speakers on the occasion were Mr Heinze Bormann of Dressden Banjul Organization and the Public Relations Officer of the NDEA.