There was yet another moment of drama at the Special Criminal Court in Banjul yesterday when the prosecution's 6th witness, Captain Bunja Darboe, told the court that he would not mount the witness box to give evidence.

This was the court presided over by Justice Ikpala in the treason trial of Lt General Lang Tombang Tamba, former chief of defence staff, and Rear Admiral Sarjo Fofana, the former chief of naval staff.

Captain Bunja Darboe is a convict serving life imprisonment after being found guilty by the general court martial for his involvement in the 21st March 2006 aborted coup plot allegedly masterminded by former chief of defence staff Colonel Ndure Cham, who is at large.

"I do not even know who you are. I have never met this man," he said, referring to the Director of Special Litigations (DSL) at the Attorney General's Chambers, who is now prosecuting the case.

DSL Daniel O. Kulo then asked the witness a question, but senior defence counsel SM Tambedou objected to the question on the grounds that the witness cannot answer the said question, because he was not in the witness box.

"I have never seen this type of practice, a prosecutor asking a witness questions outside the witness box," counsel queried.

Subsequently, after the witness said he did not know why he came to the court, the trial judge intervened, and ordered the prosecutor to let the witness know why he was in court.

The DSL Daniel O. Kulo then explained to the witness, but the witness still insisted that he would not enter the box, despite the explanation made by the DSL.

This prompted defence counsel L.K. Mboge to rise and told the court that it was improper for the DSL to go on with the case like this.

He said he strongly objected to the manner in which the DSL was proceeding with his case, adding: "it is not a proper procedure"!

DSL D.O. Kulo then applied for the witness to be treated as a hostile witness, adding that Darboe was his witness, and that he brought him to court.

Justice Ikpala again told the prosecutor that he called "this man", meaning the witness, adding that it was the prosecutor's duty to explain to him and stabilize his mind.

L.K. Mboge then added: "My lord, the state was not prepared, and the witness was not also prepared to give evidence."

Meanwhile, after he was labeled "a hostile witness" by the Special Criminal Court in Banjul, Captain Yaya Darboe was yesterday cross-examined by defence counsel LK Mboge.

Under cross-examination, Yaya Darboe told the court that he was promised at the NIA that he would be re-instated into the army, adding that he was not re-instated.

Darboe, who was sentenced to life imprisonment, also said he was promised that he would be paid for the years he spent in prison, and that he is yet to be paid, when Mboge fired more questions.

It was because of those promises that he made exhibit C, Darboe went on, but the prosecutor objected to the defence counsel's question, but was overruled by Justice Ikpala.

He also told the court that he wants to be a free man, when Mboge asked whether he wants to be reinstated in the army, and be paid for all the time he spent in prison.

Yaya Darboe further said he was tried for the 2006 coup plot, and is currently serving his term in prison.

Counsel for Lang Tombong Tamba said he had no questions for Yaya Darboe.

Darboe told the court he knows it is against the law to tell lies to a law enforcement officer, especially considering that treason carries the death penalty.

He denied that he came to court to lie against his former senior officers, when the prosecutor, DO Kulo, also fired questions during re-examination.

Tamba and Fofana are being tried in connection with charges related to the 2006 aborted coup plot, and are maintaining their innocence. 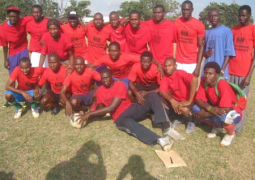