Gambia's famous king of reggae, Dr Olugander, recently received an international award as the best Gambian reggae artist for 2009. The award ceremony, which took place in Atlanta in the United States in the form of a three-day festival, was organised by Atlanta Gambia's Emergency Relieve Association (AGERA). The prestigious accolade is been conferred on him in recognition of his sterling contribution to the promotion and development of Gambia's burgeoning music industry.

Speaking in an interview with Entertainment last Wednesday, Dr Olugander said he was invited to the US to receive this award in recognition of his good work over the years.

He revealed that Atlanta Gambia's Emergency Relieve Association is a non-profit organisation that takes care of the Diaspora. Dr Olugander explained that over the years, they have been using his Song entitled 'Little Gambia' as a festival anthem. The noted Gambian reggae star, who had just returned to the country, has something pleasing in store for his ever-growing fans. He indicated that he would be organising a small programme at the Tallinding Bufer Zone next Wednesday.

According to him, the event would be sponsored by Africell.

Dr Olugander went on to show appreciation to his fans both at home and abroad in supporting him in one way or the other.

He also sent special acknowledgment the National Television for covering his arrival at the airport.

Dr Olugander who received the award on the 6th July 2009 has released a 13-track album entitled "Stronger than Before' and is a live band album that match international music standard.

"At the moment, we are trying to put it in DVD, but right now it is in CD format and is available in the market," he said.

For his part, Valentine Banjakey, Managing Director, Gander's Productions, expressed that they are proud of Dr Olunger's achievements. He revealed that he was dole out as the best Gambian reggae artist for 2007 by the Njawara Youths and Sports Committee.

He said Olugander was also awarded in 2008 thanks to his Song 'Run De Place' which was voted the best reggae song at an award ceremony organised by Gambian Talent and Saul Sound Promotion.

"Now we received an international award from AGERA in Atlanta Georgia, which is so great. We are hoping and working very hard to make sure that Dr Olugander super-stardom is limitless and we are working to cement his status as a major international recording artist," he said.

"I am thanking Africell for sponsoring the welcoming party and all fans of Gambian music for the endless support," he concluded. 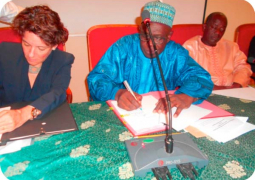