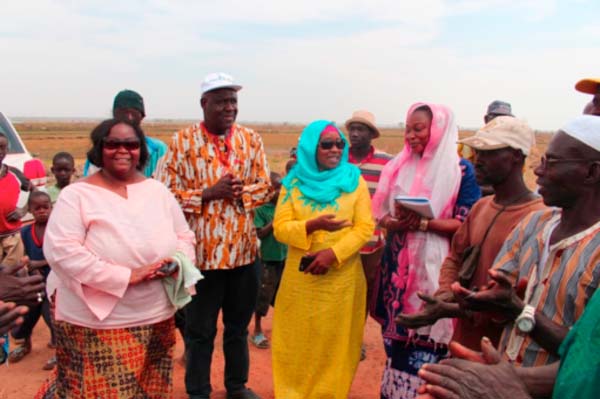 Alhagie Omar Khan, Governor, Central River Region recently presided over the launch of a Sheep fattening scheme worth about D365, 000 at Panchang Sancha Taba in CRR North. The FAO funded one-year Tele-Food Project is aimed at improving food and nutrition security, employment and income for members of a women group dubbed ‘‘Taku Legaye’’ and the community. The event was graced by Dr. Perpetua Katepa Kalala, FAO Country Representative and Mariatou Njie, Assistant FAO Representative and Head of Programmes accompanied by Sariyang Jobarteh, Deputy Director General of Agriculture, Amie Fabureh, Deputy Director of Horticulture Technical Services, The Senior Agriculture and FAO officials were on a three-day tour of 8 community vegetable gardens supported by the EU funded MDG1c project in NBR, LRR, CRR and URR.

Speaking at the event, Governor Khan acknowledged FAO`s consistent partnership and support to The Gambian government and people. He challenged the target beneficiaries to work hard and reciprocate FAO`s goodwill gesture by making the project a resounding success. He reiterated government`s commitment to women and youth empowerment and the alleviation of poverty.

Dr. Perpetua Katepa Kalala, FAO Country Representative stated that the project is in line with all the major national policies and programmes for development. She expressed optimism that the assistance will make a big difference in the lives and livelihood of the target beneficiaries the majority of whom are women. Dr. Kalala also hoped that the intervention will be sustained for the benefit of both the present and future generations while urging them to work closely with the Department of Livestock Services (DLS).

Lamin Saine, Deputy Director, DLS and Mamud Njie, Regional Livestock Director for CRR North both underscored the significance of the project towards the attainment food and nutrition security and improved livelihoods in the country. They enjoined the community to adhere to the technical advice of the extension works and work collectively for the successful implementation of the project. Mr. Saine explained that the scheme has the potentials to lift women and youths out of poverty if well managed. He used the platform to acknowledge FAO`s remarkable support to his department while reaffirmed the department`s full support to the initiative.

Alhagie Malick Mbye, Chief of Upper Saloum, Musa Ceesay, Alkalo of Panchang Sancha Taba and Nabi Jallow, President, Taku Legay Group all lauded the initiative. They urged the community to take ownership of the project and work together for the realization of the desired objectives.

In a similar development, the DoA and FAO officials also witnessed the launch of another one-year FAO funded Tele-food project at Kundam, Youth camp in URR. The Broilers Production project worth about D280,000 will start with 1,000 one-day old chicks. It is designed to support the Regional Youth Development Kaffo in their quest to improve income, food and nutrition security and create employment for the youths.

Alhagie Jahara Juwara, CEO Basse Area Council who presided over the ceremony on behalf of the regional governor thanked FAO for the gesture. He described the project as timely, noting that will empower the youths and women to contribute effectively towards the achievement of vision 2016. Mr. Juwara also stated that the intervention will help reduce the country`s import bills and discourage rural-urban and illegal migration.

Dr. Perpetua Katepa Kalala, FAO Country Representative explained that the project was approved because it is in line with the priorities of The Gambian government, FAO and the UN Gambia government development cooperation – the UNDAF. She noted that the project is one of the ways to encourage youths to take up agriculture. There is high demand for poultry meat in this country and this project can help in meeting the demand, she added.

Amie fabureh, Deputy Director, Horticulture, DoA, praised the URR youths for their active involvement in agriculture. She encouraged them to take up their youth farm more seriously and the tele-food project for the attainment of the desired objectives. She underlined the importance both government and FAO attaches to such initiatives.

Lamin Saine, Deputy Director, DLS and Sanjal Conteh, Regional Livestock Director for URR both explained that if well managed the project can easily generated a lot of income for the group while improving food and nutrition security in the region and beyond. Mr. Saine appealed to the local population to patronise local poultry products for the attainment of sustainable development and economic growth.

Alhagie Mawdo Suso, Coordinator, Regional Youth Development Kaffo, explained that the project will directly benefit up to 50 youths (32 female and 18 male) from across the region at the beginning. He restated their resolve to ensure the success of the intervention.