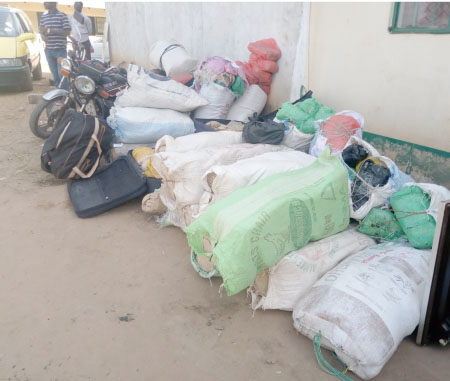 Operatives of the Drug Law Enforcement Agency, The Gambia (DLEAG) have arrested over 30 suspects with more than 240kg of alleged cannabis. The arrests were made from different locations within the West Coast Region as part of the agency’s operational activities in the 4th quarter of 2019 and the beginning of 1st quarter of 2020.

The suspects are currently under the custody of the narcotic officers as investigations into the matter continue.  The arrest according to DLEAG officials; is the biggest cannabis seizure in 2020. Officers of the Anti-Crime Unit of The Gambia Police Force during its patrol have also seized about 82kg of cannabis.

Out of the 30 suspects arrested, four of them are Senegalese. The DLEAG officers are also hunting two other suspects who escaped arrest during the process.

Mawlud Faal, DLEAG’s commissioner in WCR, calls for concerted effort to eradicate the menace of drug trafficking and its related issues in the country, saying the arrest was effected at the end of 2019 and beginning of 2020.

DLEAG, he added, is well prepared in ensuring that drug trafficking and related organised crimes are completely wiped out from the country., “All hands must be on deck in ensuring that the agency achieves its objectives,” he stated, while disclosing that some suspects were arrested in Sibanor, Kalagi and other places in the WCR.

The agency’s spokesperson, Ousman Saidybah, said the cases presented related to operations within WCR that resulted in the seizure of over 300kg of cannabis Sativa within hot spot areas in the region.

PRO Saidybah hailed the partnership among the different security apparatus in the country in combating drug trafficking and its related issue, saying; “criminals have no border and boundaries and they have no restriction, hence their operations and activities must be dismantled.”

He warned compound and vehicles owners to be vigilant of the kind of people that they give their vehicles to, adding that some are using it as a means of transporting cannabis and other bad things. “You invest lot of money to have your compound or commercial vehicle only to give it to notorious person who is involved in unwanted issues.”

Cannabis, he noted, remains a threat, saying it is important “we join hands together to fight the menace because it’s a risky behavior. He said that majority of cannabis that come into The Gambia are from the southern Cassamance region of Senegal. “Investigations are ongoing and those that are found wanting will be taken to court.”