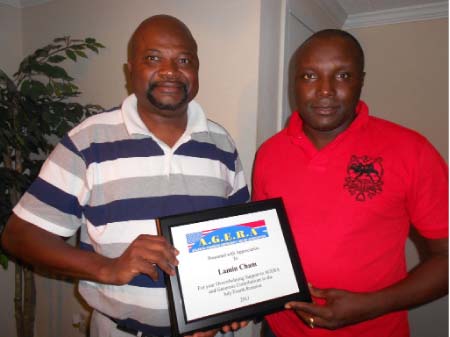 Of all acclaimed music impresarios in , DJ Lamin Cham will be one of the highly rated Champion Sound bosses to successfully organise series of concerts in the world.

This has no doubt earned him both local and international recognition.

Speaking to Entertainment on Thursday at his studio at Westfield, DJ Lamin Cham said he was awarded by the Atlanta-Gambian Emergency Relief Association (AGERA) as a show of appreciation for his overwhelming support to AGERA and his generous contribution to the July 4th Re-union.

Mr Cham said AGERA is the oldest Gambian association based in , which has been in existence for 32 years helping Gambians with their immigration issues and housing needs as well as bringing them together under one culture.

“Our contribution to the event was very successful with more Gambian participation featuring Pa Omar Jack, Nancy Nanz, Abdou and Fafa and Pap Joof of Senegal,” he said.