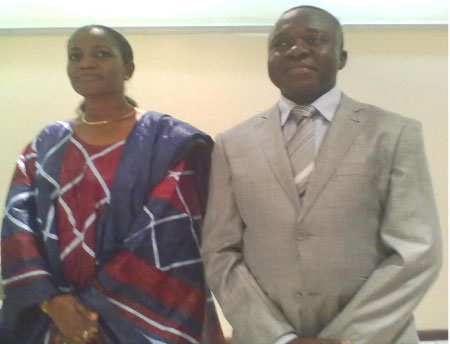 One of the leading global express and logistics companies, DHL, on 6 July 2012 held a cocktail reception for their outgoing country manager of The Gambia branch at the Kairaba Beach Hotel.

The event, attended by some government officials and consular-co, staff of DHL, customers among others, was purposely to thank the outgoing country manager, DHL Gambia, Ndioro Ndoye Sene, for her valuable support during her tenure as well to welcome Mr Claude Zocli, the new country manager of DHL The Gambia.

Ever since, she said, the company has continuously expanded and currently has many employees.

‘’DHL is proud to offer, in the smiling Coast of Africa, services that meet international standards and norms in terms of speed, reliability and security,’’ revealed the outgoing manager.

According to Ndoye Sene, DHL services now cater for nearly more than hundred custo     n          mers in The Gambia.

She said she joined at the branch in The Gambia in February 2010 from Senegal, noting that her stay in The Gambia has been very enterprising. She expressed gratitude for the overwhelming support she had received in The Gambia during her tenure.

‘’I had unique opportunity to work with a team of dedicated and motivated professionals. Together we met every challenge and met most of the targets that were assigned last year,’’ said madam Ndoye Sene.

‘’If DHL is now the leader of the global Express and logistics market, it is thanks to the quality of its services and the commitment of its employees, especially to the loyalty of its customers in The Gambia and worldwide,’’ echoed the outgoing country manager while recommending her successor Claude Zocli.

Also speaking was the director of DHL, Alieu Momarr Njai, who said they decided to establish DHL Gambia and since that time it has been progress successfully.

‘’All our corporate social responsibilities are being addressed, the most recent one has been the delivery of mosquito bed nets for malaria control programme worth tens of thousands of dalasis,’’ said the director.

According to Mr Njai, The Gambia under the leadership of President Yahya Jammeh, due to the peace and stability and the conducive environment that exists in the country, not only for DHL but also for all the investors, who are most welcome.

He finally assured of his fully cooperation to the incoming country manager, Claude Zocli, and to the Government of The Gambia.

Desire ZAKPA, manager director of the Cluster, said DHL is proud to offer in The Gambia, services that meet international standards and norms in terms of speed, reliability and security.

Speaking on behalf of the DHL staff, Ebrima Saho thanked the outgoing manager for her support during her tenure.

Mrs Ndiore Sene joined DHL in 2001 as field sales executive and occupied different functions, even at the zonal level, before being appointed as country manager for DHL The Gambia.

Ndioro’s achievement over the last 11 years has been very successful and recognised at Group Level.

She received a Global Sale Award in 2003, best HR practices in 2008 and lately for DHL Gambia, in 2010 the prize for the best EBIT Margin in small countries in SSA, the award on Clearance of Arrival ( Great Service Quality) in small countries SSA.