The defence counsel representing the nine foreign nationals in the multi-million dollar cocaine trial yesterday informed the Banjul Magistrates’ Court, presided over by acting-Principal Magistrate Alagba, that the defence has closed its case.

Lawyer Lamin L.S Camara and Lawyer E.E. Chime told the court that the 3rd, 4th, 6th, 7th, 8th, and 9th accused persons would not enter into their defence and, therefore, the defence was applying to close their case.

The trial was at that juncture adjourned till 23rd August 2011, for defence counsel L.S. Camara to file his written address.

It would be recalled that the prosecution called 17 witnesses, and tendered several exhibits during the trial. 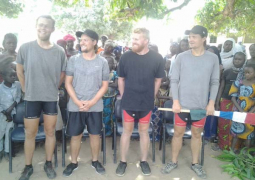