The Vice President and Minister of Women’s Affairs, Dr Isatou Njie-Saidy, on 17 January 2012 launched the African Gender and Development Index Report (AGDI) at a ceremony held at the Kairaba Beach Hotel in Kololi.

In her launching speech, the vice president said: “This august gathering, will agree that the 1995 conference on women marks an important turning point towards gender equity, and the empowerment of women and the implementation of its related platform of action have highlighted great challenges especially in the 12 critical areas of concern.”

She added that the validation of the AGDI national report is a major milestone, an important means to an end in mainstreaming gender in the development process.

She also spoke on the importance of accessing timely and reliable, high quality data, particularly gender-related data, for planning, which, she added, continues to be a challenge not only for The Gambia but also for many developing countries.

She said: “Generally, use is being made of the 2003 population and housing census data as well as other health and demographic surveys conducted in the early part of 2000 and such scenario alone will not give a true picture of gender and women empowerment status in The Gambia.

“Many of our statisticians are not gender experts and thus symbolic relationship needs to be built between them and the same time train a core of experts who are both statisticians and gender specialists.”

She added that as key strategy in addressing the data paucity with a view to having in place a proper planning tool for gender and women empowerment, the AGDI was developed by the United Nations Economic Commission for .

This index is a monitoring and evaluation tool on gender equality, equity and empowerment of women.

This, according to VP, is a composite index that measures the gap between men and women and assesses the progress made in the implementation of the various gender and women empowerment policies.

It also incorporates the major international and African charters and conventions including the MDGs and integrates a number of variables that have a particular relevance to men and women.

VP Njie-Saidy further revealed that the aim of the index is to assist African countries, develop uniform monitoring indicators, and mechanisms that will allow policymakers and planners to assess their performance in implementing policies and programmes aimed at improving women’s status and the attainment of national and international gender and development goals.

She noting that the tool equally will assist to gather adequate information on African women’s concerns and make comparisons through its standardized African women’s progress score-board and the wide-ranging gender status index among others.

The having the obligations on reporting on the progress made in gender equality equity and the empowerment of women has used key instruments like the AU Women’s Protocol on CEDAW, UNCEDAW reports, the MDG progress reports, the MICs and other multi-sectoral reports.

The country has fulfilled most of its gender-related reporting obligations to international bodies and the only major pending report is on the UN CEDAW on which she was happy to report the 4th, 5th and 6th editions have been developed and will be submitted soon to the UN CEDAW committee.

“Regarding the sustainability of this noble initiative, the august body is informed that the AGDI will be fully decentralised in the regions and municipalities with operational databases on gender and empowerment of women,” she said.

“This process will not only help in identifying gender gaps and women empowerment issues at the decentralized levels but will also serve as an important catalyst  in addressing the said issues.” 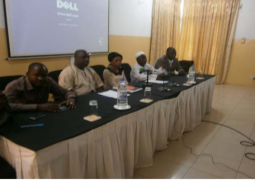