A report published by a group of mainly African relief and advocacy groups, the Darfur Consortium, said the force was too small and inadequately funded.

The force commander told the BBC that the report touched on vital issues, but that people expected too much.

The five-year-old conflict has left some 300,000 people dead.

The joint African Union-Union Nations Mission in (Unamid) was set up after the United Nations Security Council promised protection to some four million people caught up in the war between the Sudanese government and rebels.

But insisted that Africans should make up the bulk of the soldiers.

The BBC's Mark Doyle says most of the troops came from an earlier underfunded solely African force and the hope was that UN involvement would improve logistics.

The consortium says Unamid is "in danger of becoming the world's latest broken promise" in the region.

It says that six months after the mission began, only about a third of the 26,000 personnel promised had been deployed.

It also says the mission is still critically short of basic equipment such as helicopters and armoured vehicles.

Some of the soldiers from the former African force were so badly supplied that they were reduced to putting blue plastic bags over their helmets to indicate that they now worked for the UN, the report says.

The report added that the soldiers who had deployed could do much better by, for example, mounting regular foot patrols in camps or consistently protecting women who collect firewood from the risk of rape by militiamen.

The report cites several instances when Unamid soldiers observed violence against civilians without acting against it, and said commanders were inconsistent in interpreting the mission's mandate.

The report also accuses the Sudanese government of blocking key deployments, and says rich countries have not given the peacekeepers enough equipment.

Unamid commander Gen Martin Luther Agwai greeted the report's recognition that the force was short of critical resources, saying that people had had unrealistic expectations.

"If really you have an organisation that lacks critical resources and you expect that force to do magic then I think you are not being fair to the force," he told the BBC.

He said many people had overlooked logistical constraints including delays at 's single sea port, and the large distance from the port to the area of operation in across land routes that are unusable during the rainy season.

"People thought that things would work faster and better but the reality from the ground does not translate that way."

But he also rejected concerns that the mission was doomed to fail, saying that it had the backing of the UN and the AU.

"I'm not sure the United Nations and the African Union would want to fail because if they do, the whole world would fail. So based on that, I am optimistic."

says the scale of the violence and suffering has been exaggerated by the west for political reasons.

It denies charges that it organised the Arab Janjaweed militias, accused of widespread atrocities against 's black African population.

The conflict began in 2003 when rebel groups took up arms, complaining that the area was being marginalised by the national government. 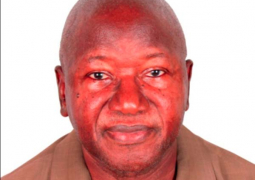