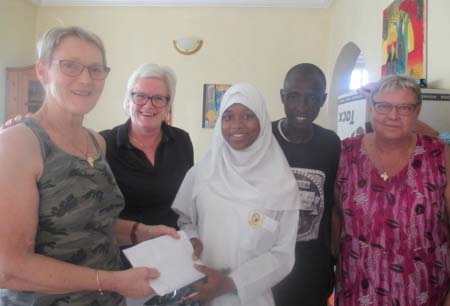 Officials of a Danish foundation called School and Health Project – Gambia (SOS-Gambia) are currently in The Gambia for their annual trip to pay the school fees of the 200 students they are sponsoring.

The foundation is operating in partnership with a local sister organisation in The Gambia called Foundation for the Needy – Gambia (FON-Gambia).

The students were given their sponsorship packages yesterday during a ceremony held at Kotu.

Speaking on the occasion, Susanne Skoda, board chair of the Danish organisation, SOS-Gambia, said her first time to The Gambia was in 2004 when she came as volunteer at the Serekunda health centre.She worked there as volunteer nurse for six months.

She said that at the end of her volunteering period, she decided that she could not go back without contributing her quota to the development of The Gambia.

“As a result, I deemed it wise to initiate a project to help the young people of this country,” she said, adding that the project started by helping 10 to 15 needy people.

Ms Skoda said thanks to support of her family and friends, SOS-Gambia had gradually expanded until now that “it is sponsoring 200 students across The Gambia”.

She explained that the foundation is not only concentrating on sponsoring students but also providing medical items and school equipment such as tables, chairs, computers, school bags and chalk.

The board chair of SOS-Gambia said the organisation is focused on achieving quality education and health for the young people and the entire populace of The Gambia.

She urged The Gambia government to help in shipping the containers of the project from Denmark to The Gambia.

Ms Skoda said the management team of the project in Demark is very appreciative of the efforts of their sister organisation in The Gambia, FON-Gambia, for successfully acquiring a land in Tujereng village for the construction of a skills training centre to build the capacity of young people.

Sussie Lung-Jensen, vice chair of SOS-Gambia, expressed appreciation for acquiring a land in Tujereng for the construction of skills training centre.

“This is a big achievement for the foundation,” she said, adding that the centre will focus mainly on preparing the young people for their future by building their skills.

Ms Lung-Jensen called on young people to forget about travelling to Europe through the ‘back-way’, saying with determination and hard work they can make it in The Gambia without risking their lives.

The skills training centre in Tujereng village will be officially inaugurated next week.Already, the centre has 50 students enrolled for a three-year programme and all of them are on sponsorship.

Omar MJP Ndow, national coordinator of FON-Gambia, said the organisation was registered in 2008 in The Gambia.

But since 2005, it has been distributing materials and equipment to schools and hospitals in the country.

Mr Ndow thanked the management of the Danish organisation for helping the needy people in The Gambia for the past ten years.

He also commended The Gambia government for granting duty waivers to ease the clearing of most of the containers of the organisation from the seaport.

Mr Ndow said his foundation had signed a memorandum of understanding with the two ministries and “are currently working very closely” on the ongoing projects.