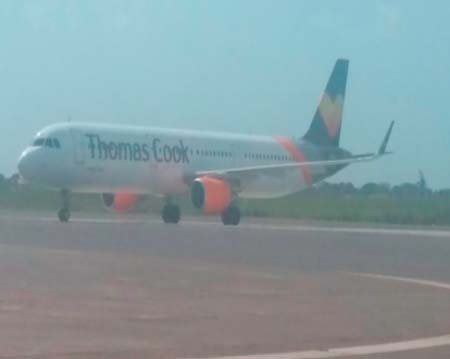 They were received by senior officials from the Gambia Tourism Board, as well as tour operators.

Speaking to journalists shortly after the aircraft landed at the airport, Adama Cham, statistics and information manager at the Gambia Tourism Board, thanked Thomas Cook for bringing another batch of tourists to the country.

A month ago, two flights from Scandinavian countries landed in The Gambia with a substantial number of tourists.

Thomas Cook from the United Kingdom was the third flight to arrive with tourists in the country in recent weeks.

This is a promising season, according to Mr Cham, who said the UK is a special market with great significance for the GTBoard.

“Tourists from the UK contribute about 25 per cent of our arrivals. So a flight from the UK, which was not operating last year, is a move in the right direction,” the GTBoard statistics and information manager said.

“We have forgotten about the Ebola because this time we are not thinking about Ebola and, hopefully, the tremendous achievements and the pre-achievements have been replaced this year,” he added.

He said there are clear indications that this year’s tourism season is promising.

In her remarks, Mrs Airk, destination manager for Thomas Cook airline, said they are operating in three different countries: the UK, Sweden and Finland.

This time around, she revealed, they would be having six flights per week from the UK.

She said they are “very happy” to come back to The Gambia.

“We are hoping to bring more tourist flights in this year’s tourism season, and more next year,” she added.