After putting pen to a 2-year professional contract with the Impact De Montreal in the US Major league soccer last month, former Bakau United prolific striker Pa Amadou Gai, commonly called Daddy Gai, said he was more than excited to join the list of Gambian foreign based players and believed he can earn his place in the national team if he is given the opportunity to be part of the squad.

Daddy who is currently in the country, further expressed optimism that he has a lot to offer for in the major league soccer championship due to his impressive goal-scoring records that make him undoubtedly one of the finest strikers in the country.

"I would like to thank my parents for allowing me to continue playing football which initially was ruled out after years of frustrating moments and a lot of unsuccessful trials thinking that I would no longer make any impact in the game" Daddy told Pointsport at his residence in Bakau New Town on Monday.

But now I thank God, my parents, and all those who supported me during the difficult time especially the GFA Supremo Seedy MB Kinteh, for his encouragement and continuous support during my stint in the GFA league, he told our reporter.

The former Scorpions goal machine also used the platform to commend the Gambian leader for the tremendous support the latter continues to render towards the development of sports in The Gambia and further thanked him for giving him a plot of land in appreciation of his contributions when he was playing for the national team.

Daddy also seized the opportunity to thank the entire management and his team mates in for the warm welcome accorded to him upon his arrival in the and promised them his very best effort towards achieving great results for his new club as the league proceeds.

Daddy Gai  hopes and prays for the youngsters who are following his footsteps so that they can also realise their  dreams of playing in a professional league in future.

The 24-year-old  also admitted he is in contact with some  of his compatriots in the .

He further seized the opportunity to commend his Bakau United team mates and the entire management of the team for what he described as their out-standing contribution in making his dream a reality and challenged his Gambian team mates to follow him as soon as possible.

It could be recalled that Daddy has signed a two [2]year professional contract with the Canadian side, , for a reported fee of 2000 US dollars on .

According to Pa Amadou Gai, he has already made his 1st appearance for in a 3-2 defeat to their opponent.

is currently at the bottom of the league table with only a single point. 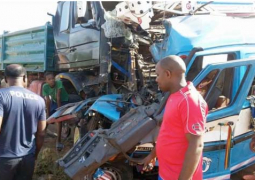