Custodial sentence for a thief

A Magistrate court in Kanifing recently handed down a custodial sentence of six months with hard labour against one Ansu Njie for shop breaking and stealing.
According to the facts of the case as narrated by police prosecutor, First Class 319 Jobe, it happened on 12th October 2009, at Old Jeshwang.

He said the complainant reported to the Kanifing Police Station that somebody has broken into his shop and carted away with items worth D24, 000.

Further narrating, Officer Jobe told the court that, on 19th October 2009, one Kebba Njie was arrested during the cause of the investigation. He added that Kebba Njie later told the investigators that a DVD and a tape player were given to him by one Cherno Bah and the convict, Ansu Njie. He revealed that the said Kebba Njie led the police to the arrest of the convict who confessed of committing the act with one Cherno Bah.

In his plea of mitigation before senior Magistrate Abdouli Mbacke, the convict begged the court to temper justice with mercy. 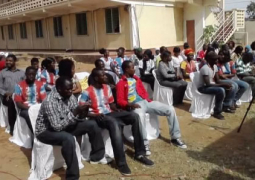