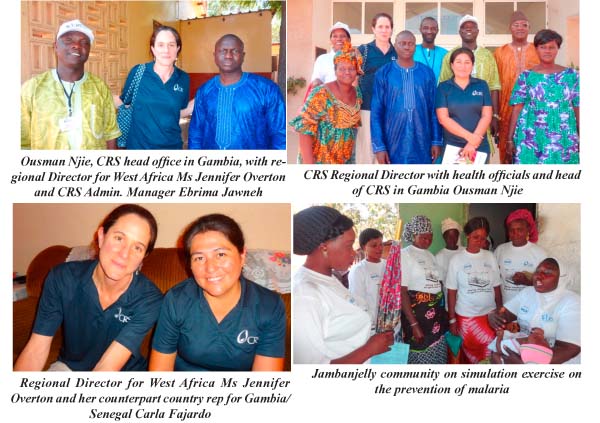 The mission was also part of the regional director’s engagement in the country to get first-hand information on the progress of the CRS intervention sites, as well as to familiarise herself with national malaria control programme under the Ministry of Health, the Ministry of Agriculture and other partner agencies.

Receiving the delegation at Jambanjelly, the village Alkalo, Alhagie Nuha Jammeh, commended the delegation for visiting his village, and to meet with his villagers to talk with them about the training activity they underwent in eliminating malaria.

He said the visit of the Regional Director and his team was a clear indication of their concern for the welfare of his community.

The knowledge his community drives from the malaria project supported by CRS would go a long way in eliminating the spread of malaria in their society, he added.

He assured the regional director and his team that the relationship between his community and CRS would continue to go from strength to strength.

Alkalo Jammeh (village head) also thanked the health promotion and development organisation through CRS Gambia office, for their active participation and encouragement in the project.

According to the village head, the intervention of the project with CRS support had changed the livelihood of the community, as women now know how to protect their children from getting malaria by using a bed-net when children are sleeping.

It has also helped them in environmental sanitation, as well as to know the mode of transmission, preventive methods among other protective measures.

He also thanked the CRS team in The Gambia and the National Malaria Control Programme for providing competent facilitators to train his community and to create more environmental awareness and cleanliness in the society.

Since then, they were providing child survival projects up to 2005 when the Global Fund came with the malaria project, and the community of Jambanjelly continued with the programme.

They assisted the programme by distributing bed-nets to people, he said, adding that the rate of malaria had gone down in Jambanjelly village thanks to the good work of the community with support from the project.

He urged the regional director and his team from CRS to endeavour to visit some of their houses to find out how the project is being implemented.

“We are very grateful to CRS management through their programme manager in The Gambia for their support and encouragement, and for the love that they have for the people of Jambanjelly,” he said.

Lady President Fatou Darboe said the importance of the CRS intervention to her community could not be overemphasised, because since the intervention malaria cases had dropped drastically within the community.

The intervention of the CRS and its partners in the community had impacted positively in attaining self-environmental cleanliness in their society, she added.

Mrs Darboe urged her community beneficiaries to take the project seriously, as health is the number one priority in life, adding that there would be no meaningful development in the absence of health.

The CRS Regional Director for West Africa, Ms Jennifer Overton, in her speech, thanked everybody for the hospitality accorded her and her team from the CRS country office.

CRS was “very proud” to be a partner with the national malaria control programme to eliminate malaria in The Gambia, she said, adding that “CRS is very proud to be working with the health promotion and development organization”, which is their partner in The Gambia.

“We have seen great progress in bringing down malaria in the country,” she said, whist acknowledging the efforts of the people.

She also advised the community to ensure pregnant women also get the Fansidar anti-malarial drug. 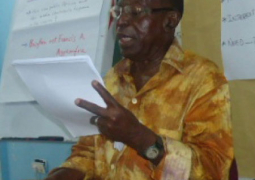