When the case was announced, the prosecuting officer, CPL 358 Sarr, told the court that the prosecution was applying to withdraw the charge against the accused persons.

He said the prosecution received a letter from the complainant, which was addressed to the commissioner of police, for the case to be withdrawn before the court.

CPL Sarr further stated that he was instructed to withdraw the charge against the accused person, as they did not want to proceed with the case.

The application was granted, and the accused persons were accordingly discharged.

It was alleged that the four accused persons, Yankuba Jabang, Alieu Jabang, Mbemba Sahou Sillah and Ousman Kanteh, were on 13 July 2011 at Sambuya village in Kombo South district of the West Coast Region, jointly with intent to intimidate or annoy the community of the said village, entered a disputed plot of land and buried charms there. 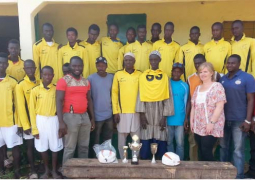