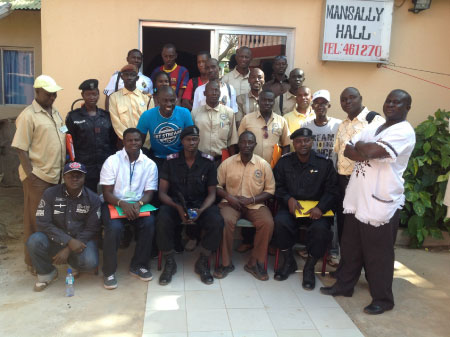 As part of their mandate in raising public awareness on child rights and protection-related issues, Child Protection Alliance (CPA), in collaboration with the Gambia Tourism Board (GTB), recently held a daylong sensitization training for tourist guides and security from the child welfare unit.

Held at the Baobab Lodge at Bijilo, the training addressed the topic of “Child Protection in Tourism and the Tourism Offences Act 2003”

The workshop, funded by ECPAT Netherlands, brought together 30 participants from the Official Tourist Guides and the Tourism Security Unit.

The training aimed at capacitating participants as they deal directly with the tourists thus helping them understand the Act and how to protect children from being victims of child abusers.

Speaking earlier, Mustapha Jobe, president of the Tourist Guides Association, highlighted the importance of the collaboration between the tour guides and security officers, as this will contribute meaningfully to the fight against Child Sex Tourism in The Gambia.

He thanked CPA for organizing the training which, he said, is not the first time as there were similar capacity building workshops held in the past geared towards the protection of children from sexual abuse and exploitation in the tourism industry in particular.

For his part, Mr Njundu Drammeh, national coordinator of CPA, said it is one of the initiatives of CPA that it does, in partnership with the Gambia Tourism Board to mainstream all relevant stakeholders in the crusade to end child sexual abuse and exploitation in tourism.

He highlighted the important role played by tourist guides, whom he said are the main contact of tourists whenever they enter and wherever they are going to in the country.

Mr Drammeh urged the participants to be mindful of how they deal with tourists, especially when it comes to the protection of children.

He said a lot of tourists are genuine but that there are few who are only interested in exploiting the poor economic situation of The Gambia by engaging in sexual relationship with the country’s minors.

He commended the government’s stance in protecting children. This, he said, is manifested through the enactment of the Tourism Offences Act in 2003 and the Children’s Act in 2005 and several other initiatives such as the formation of the Tourism Security Unit to protect the interest of The Gambia in the Tourism Development Area.

He reminded officers of the Tourism Security Unit and members of the Official Tourist Guides that they have a key role to play in the protection of children as they know all parts of the country, and tourists who want to engage in exploiting children are likely to use them to get to children.

Mr Kebbeh emphasised GTB’s commitment to working with all relevant stakeholders in the tourism industry to strengthen the collaboration in ensuring that children are safe while safeguarding The Gambia’s interest as a leading tourist destination.