The Child Protection Alliance (CPA) and Voice of the Young with their partners, such as the National Youth Council, Think Young Women, SOS Children Village and others Tuesday joined the rest of the world in commemorating the Day of the African Child.

This was a day set aside by the African Union, as a result of the killings in 1976 of children in Soweto, South Africa, who were protesting against the poor quality of education and demanded for them to be taught in their own languages.

The ceremony brought together stakeholders in child rights and protection, school children, members of the Brufut community, youths and child rights activists, as well as members from different youth organizations, who witnessed a match-past to the venue centred on the theme: “Accelerating our collective efforts in ending child marriage in The Gambia.”

The programme was also staged in the form of a ‘Bantaba’ that would promote dialogue between parents, community members and the children to talk about ways and means of ending, if not eradicating, child marriage in The Gambia.

Delivering her keynote address, Fanta Bai-Secka, the director of Social Welfare, said the Day of the African Child was set aside by the Organization of African Unity now the African Union not only to commemorate the killing of children in Soweto, South Africa, in 1976 but also to reflect on the plight of African children, the lives they live, and map out strategies to address the challenges they face.  She added that the AU encourages and takes up initiatives to mark the day, and that was the reason why they at the department of Social Welfare and the government of the Gambia joined the Child Protection Alliance and its partners in commemorating the event.

She further stated that the commemoration of the Day of the African Child this year was extremely significant, because it also marks the continent’s celebration of 25 years of the African Charter on the rights and welfare of the child.

This is a charter that seeks to enforce the Convention on the Rights of the Child, and specifies the rights of children with an underlining motivation of African values and culture, including the responsibility of children and the need for them to be responsible and care for their parents.

They all appreciate the fact that child marriage is one of the most difficult and challenging issues to discuss, she continued.

However, it affects the lives of children, it is an abuse of their rights and, therefore, they must join efforts to address this challenging issue.

She said marriage is one of the most respectable institutions in the society and cultural life; therefore, it should be engaged with dignity and maturity.

A child, therefore, could not be able to give consent and be able to engage in such a challenging institution that he or she is not prepared for, she further noted.

Marriage is the foundation of most societies and the means of propagation, she went on.

“The theme for this year’s 25 years after the adoption of the African charter is: ‘Accelerating our collective efforts to end child marriage in Africa’ is indeed very appropriate, as child marriage is one of the issues affecting the education, access to health and development of children in Africa, as well as in The Gambia.”

Mariama Jallow, president of Voice of the Young, said the day marked another beginning, which shows the importance of protecting the children of the world and the Gambian children, in particular.

The Day of the African Child commemorates the Soweto uprising in South Africa during the Apartheid era, where students protested against the poor quality of education and demanded to be taught in their own language.

CPA and Voice of the Young commemorated this important day in the form of bantaba, where all children in all the regions were brought together under a single platform, to discuss issues affecting children, as well as possible means of minimizing if not eradicating it collectively.

Ms Jallow said the national theme: “Accelerating our collective efforts to end child marriage in The Gambia” was not a surprise, since the theme has appeared twice on the said issue of early marriage, which is a harmful traditional practice affecting the lives of children, most especially girls.

She added that such a practice violates article 21 of the Convention on the Rights of the Child and other African human rights instruments, which save African children from child marriage.

She said quite a lot of people engage in such practices just to uplift their economic and social, traditional and religious beliefs, which are all unjustifiable.

She said the health consequences include maternal mortality and psychological trauma.

The question now is: how do they accelerate their efforts collectively to end child marriage in The Gambia?

According to her, it is challenging, but achievable if all hands are put on deck coupled with timely implementation of their recommendations, including putting in legal frameworks so that parents are given the alternative to send their children to school.

Haddy Njie-Touray, SOS Children’s Village Director, said the occasion does not only give them the opportunity to remember the thousands of unarmed children that were killed in South Africa years ago, but it also gives the relevant stakeholders the opportunity to come together in a such a forum to share the achievements made so far.

It was also to highlight ways for the creation of a sustainable friendly environment in the schools, homes and the communities, so that the children would be able to maximize their potential and contribute meaningfully to national development.

She said when it comes to creating an enabling environment for the protection of the rights of the child, many of them would agree that a lot of laudable achievements have been made in The Gambia.

She said the ratification of the UNCRC, the African charter for the rights and welfare of the child, and the enactment in The Gambia of the Children’s Act are all testimonies to the government’s commitment towards the protection of the rights of the child.

However, they must not relent but must continue to consolidate the government’s efforts to ensure that the available laws are not only enacted, but also enforced to the letter.

The theme for this year’s day of the African Child commemoration is timely, because despite the tremendous achievements registered for the protection and the welfare of children in The Gambia, “we still have some burning issues such as child marriage which is significantly endangering the lives of many children.”

She said the SOS Children’s Village in The Gambia would continue to render its support towards the implementation of policies in creating a child-friendly environment.

The Alkalo of Brufut, Malamin K. Manneh, said this was a great day and thanked the organizers for staging such an important gathering to engage them in dialogue regarding the situation of children.

Isatou Jallow, Voice of the Young, said that since the theme is focusing on child marriage, which is a thematic issue in The Gambia, it calls for concern for every child and young person in The Gambia.

She said as far as they are trying to inculcate change in young people, it was important for them to celebrate the day in the form of a bantaba, to invite elders within Brufut to join the children and hear their voices.

Air of uncertainty continues to eat into the economy 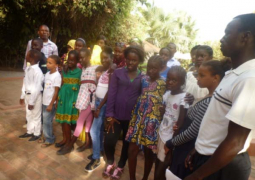