The journalists from independent press have all the rights to cover any public event, more so state functions.

We were shocked to read from The Daily News yesterday alleging that some reporters were denied entry by state security agents to cover the State Opening of the National Assembly last Friday.

We are of the belief that, if this was the case, then it was an unfortunate development, especially at the time when the government and private media are working towards improving relations.

The issue here is that, whether this or any other state function, the journalists have the right to cover for the benefit of their various audiences.

It must be known, very clearly to all, that journalists have been mandated to be the watchdog of the society and, as a result, they must be allowed to play that significant role.

What officials and security agents need to understand is that journalists, be they from the private or public media, are all playing the same role.

The only difference between us is our different editorial policies and, above all, we are all serving the Gambian people. So there should be no discrimination of members of the press.

In other words, it is not a matter of doing the independent press a favour, when given the chance to cover state functions, but facilitating our right to do our work.

This, we must emphasize, once more.

Meanwhile, we would also take this opportunity to advice reporters covering state functions and, in fact, any other coverage assigned to them by their respective media houses, to ensure they are always in at the right time.

Since it was a National Assembly function, which invited all the press to cover the event, we want to believe that if all reporters were in the Assembly chambers at the announced time, when all invitees should be seated, and were properly seated at the press gallery, then no security agent would dare to interfere with the performance of their duties.

In any case, our advice to the security agents is to live and let live.

Perhaps, they may want to start by showing more respect to the office of the Director of Press at State House, whose present occupant, according to the Daily News article, was seen pleading with the security agents to let the journalists to do their job.

In our view, it was only sufficient for her to say, "Let them in!", and her word be heard by them as instructions to be complied with.

Indeed, not to do so would be contrary to the spirit of goodwill the Director of Press at the Office of the President is visibly now attempting to build with the Gambian press.

Actually, this is a chance for a rapproachement between the Executive and journalists, who are both doing their national duty, and so we must give each other a chance to work freely, as dictated by the constitution of the .

"The free press is the mother of all our liberties and of our progress under liberty." 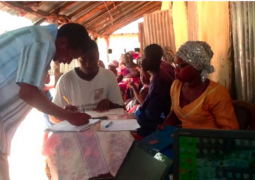