The three Gambians charged with engaging in homosexual acts yesterday applied for bail at the High Court in Banjul before Justice Abi.

When the case was called, defence counsel Gaye-Coker said the application for bail pending before the court was filed on 28 January 2015.

She said the motion is supported by a 7-paragraph document and they intended to rely on all paragraphs, adding that the state responded with a five-paragraph affidavit in opposition.

She said the application for bail was brought under section 19 of the constitution and section 99 of the CPC, which supports the applicant’s right to bail.

She added that all the offences alleged to have been committed by the applicants “are bailable offences.”

Counsel Coker argued that under section 24 of the constitution, the applicant is presumed innocent until proven guilty, therefore his right to bail ought not to be restricted.

She said paragraph 4 of the affidavit in support of the motion stated that the applicants were arrested since 9November 2014, in Senegambia around Kololi and detained at the NIA up to 24 December 2014 and were not brought before any court of law.

According to Counsel Coker, on 24 December 2014 the applicants were arraigned before the Banjul Magistrates’ Court on a single-count of homosexuality.

The applicants pleaded not guilty and were remanded at Mile 2 Central Prisons on the same date, she said.

Since 24 December 2014, she added, the applicants were remanded at Mile 2 even though the charges were withdrawn on 21 January 2015, when they were charged with new charges before the High Court, which are “all bailable offences.”

She added that the applicants denied the charges before the high court.

The applicants are Gambians who have friends and families within the community, and have sureties who could bail them, and who would ensure they make themselves available in court at all times during the trial, she further stated.

She said the applicants could not at this stage interfere with any investigation, since the investigations have been concluded.

The applicants did not wield any power or influence to interfere with the witnesses or any investigations, she said, adding that the applicants are not liable to abscond if granted bail by the court.

She argued that there is no evidence stated in the affidavit in opposition filed by the state that the applicants would abscond, if granted bail.

Still on the issue that the applicants might abscond if granted bail, counsel Gaye-Coker said suspicion, no matter how strong, does not amount to crime and there was no evidence that they committed the crime.

She said in paragraph 4a, the applicants denied they were arrested on any homosexual raid with men, but in the company of female friends.

She said there are other allegations that others are at large, in paragraph 4b of the affidavit in opposition, which according to her was not sufficient enough to deny the accused bail.

The essence of bail was for the applicants to make themselves available in court for trial, he stated.

The grounds to refuse bail stated - whether if granted bail the accused would abscond; whether he would commit other offences while on bail; whether he would interfere with witnesses if released on bail’ whether the applicants are aware of the severity and the nature of evidence against the accused upon conviction, she said.

Counsel Coker said it was up to the state, opposed to the bail, to bring sufficient facts before the court that, if granted bail, the applicants would abscond.

In this case, the maximum sentence upon conviction is 14 years; although it was severe, but it could not at the same time constitute that the accused would abscond, she said.

Counsel Gaye informed the court that Alieu Sarr was hospitalised at the Edward Francis Small Teaching Hospital in Banjul.

She said the medical condition of the applicants charged with criminal offence is a very important part of the bail application.

In response, the state represented by state counsel AM Yusuf said they filed an affidavit in opposition dated 5 February 2015 and filed in court on the same day.

He said it was trite law that all motions should be accompanied by supported affidavits, and there are rules and obligations governing the affidavits.

He said the motion could not stand on its own without the affidavit and urged the court to strike out the motion and dismiss the application.

In reply, Counsel Gaye said the objection based on section 92 of the Evidence Act, paragraph 3 of the affidavit in support, the deponent has clearly stated the occupation as a legal clerk, adding that she is familiar with the facts of the case.

She said the court could take judicial notice as a fact that the applicants’ counsel have placed their names and addresses on the motion of notice, and have signed the said document as legal practitioners.

She submitted that there was no offence committed by the applicants against section 92 of the Evidence Act.

The third applicant, Modou Lamin Bittaye, who was represented by Lawyer B.S. Touray, had his bail argument heard in chambers.

The trial judge adjourned the bail ruling for Alieu Sarr and Momarr Sowe to 17 February 2014.

Deyda’s Family: Tribute to our Mentor and Trusthworthy Father and Martyr of Press Freedom 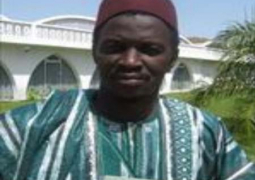